In 1823 while working in Halifax Henry Baines married Rebecca Bartle, and the couple went on to have five daughters, born between 1824 and 1835. Ellen, the eldest, was born in Halifax when Henry was working there. The four youngest, who appear in this calotype were all born in York, the first two in Micklegate, where the family first lived before Henry was employed by the Yorkshire Philosophical Society. The two youngest, Fanny and Maria, were born in the basement of the Yorkshire Museum where, from its opening in 1830, the family were housed by YPS. At the time of the 1844 British Association meeting Mary was 19, Ann (Anne or Annie) 16, Fanny (extreme right) 11, and Maria 8.

Both Mary and Anne later married at their parish church of St Olave’s adjoining the Museum Gardens. Mary married Matthew Henry Walls in 1848. They moved to Bradford where he became secretary of the Mechanics Institute. In 1855 Anne married Thomas Joseph Banks, a landscape artist from Tadcaster.

The Baines family’s three rooms in the museum basement were damp, and a year before the 1844 meeting a large bequest enabled YPS to build Manor Cottage, just to the rear of the Museum,  for Henry and his family to live much more comfortably, rent-free and with free coal and gas-light. When in 1870 Henry retired due to ill-health, he was allowed to remain in the cottage with Rebecca and Fanny and Maria, neither of whom had married. Maria died in 1877. When Henry passed away the following year Fanny and her elderly mother moved into the newly-built Lodge on Museum Street, and Fanny was employed as gate-keeper. Rebecca died in 1882, aged 76. Fanny lived there until her own death, aged 83, in 1916.

The Lodge on Museum Street is now the YPS headquarters; Manor Cottage is York Museums Trust offices. In 2018 a blue plaque to Henry Baines, creator of the Museum Gardens, was put up on Manor Cottage.

The family portrait above is a calotype taken by David Octavius Hill (1802-1870) & Robert Adamson (1821-1848), licensed from the National Galleries of Scotland. 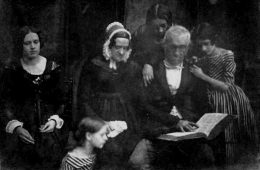