Charles William Peach was a coastguard officer who became a distinguished amateur naturalist and geologist. He was born on 30 September 1800 at Wansford, on the Great North Road in Northamptonshire. He worked for his father, also Charles William, a farmer and innkeeper, for several years before entering the mounted coastguard service, firstly in Norfolk, then successively in Dorset, Devon and Cornwall. The fact that he had continued his schooling to the age of fifteen was perhaps a clue to his potential for further learning, though largely self-taught. His occupation gave him plenty of opportunity to indulge an enthusiastic interest in marine science, and he discovered new molluscs, sea urchins, starfish, sponges and a spectacular holothurian – or sea cucumber – with twenty tentacles. He established links with numerous natural history societies, as eager to inform them of findings of local interest as he was to make them known in London.

Peach published numerous articles, and attended BA meetings including 1844 in York, where he presented a paper on marine zoology. Although he had had no formal training his work met with general approbation from acknowledged experts, one clear instance being that the 1844 BA Report resolved ‘that a Committee be appointed, consisting of Prof. Owen, Prof. Forbes, Sir C. Lemon, and Mr. Couch, for the purpose of aiding Mr. Peach in his researches into the Marine Zoology of Cornwall, with the sum of £10 at their disposal’. Another boost soon afterwards was the celebrated Oxford geologist William Buckland’s anonymous recommendation that he be upgraded to a post in Her Majesty’s Customs at Fowey.

In 1853 he moved to Scotland to be customs comptroller at Wick, where he made an important fossil discovery in limestone on the northern coast near Durness. He maintained a wide circle of scientific and literary friends, including the famous Scottish palaeontologist and writer Hugh Miller. He enjoyed a lengthy retirement in Edinburgh, where he died on 28 February 1886.

Principal sources for the text: Oxford Dictionary of National Biography online; British Association for the Advancement of Science, Report of the 1844 meeting. 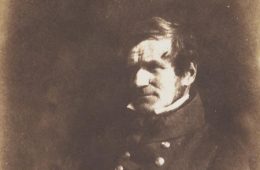