Henry Baines was born on 15 May 1793 in a cottage over the ruins of the medieval St Leonard’s Hospital in present-day Museum Street, York. From the age of twelve he was employed as a gardener, saying he first put spade in ground close by these ruins, in what became the Museum Gardens. Work took him to Halifax where he became interested in natural history.  After his return to York in 1824 or early 1825, married and with a baby daughter, he joined the firm of Backhouses, nurserymen. In 1828, the Yorkshire Philosophical Society took the lease of the Manor Shore and appointed Henry to take care of the grounds. With the opening of the new Museum in the gardens in 1830 he also became its sub-curator under John Phillips, and was provided with accommodation for his family there.

He made an immediate impression. The YPS annual report for 1830 reads: “Council consider themselves fortunate in the person whom they have engaged to take charge of the grounds; a person qualified by his skill and industry, not only to cultivate the gardens with scientific diligence, but to render essential service to the museum. His activity has already obtained for the Society over 500 plants.”

Largely self-taught, he published his Flora of Yorkshire in 1840, a vital contribution to the study of local botany. He was 51 and by then a devoted and highly valued employee of the YPS when he helped to host the British Association’s meeting when it returned to York in 1844. In 1859 the YPS Council marked his 30 years’ service with a specially made casket of Minster oak containing the gift of 200 guineas, twice his annual salary. He gave up the superintendence of the gardens in 1869 and, through ill-health, his duties in the museum in 1870, but the YPS continued to pay his full salary of £100 as a pension. He died on 1 April 1878 at the age of 84 and was buried in York Cemetery two days later. 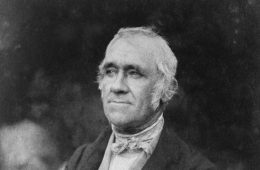