Henry De La Beche was born in London on 10 February 1796, the son of a cavalry officer whose name was originally Beach but who had changed it to claim a link to the ancient De La Beche family of Berkshire. His father died when Henry was five. He was educated in the west country, and after a failed attempt to pursue a military career he settled in Lyme Regis in 1812, where he developed an interest in meteorology and geology. There he met Mary Anning, daughter of a family dealing in the sale of fossils, and together they searched the cliffs for remains of extinct reptiles. Five years later, at the age of 21, De La Beche became a member of the Geological Society of London, and in December 1822, the very first month of its existence, he was invited to accept honorary membership of the YPS. Fellowship of the Royal Society followed in 1823.

He spent much of the late 1820s abroad after his marriage broke down, gathering material on the geology of the Mediterranean coast, and in 1831 he published a highly successful Manual of Geology. He then obtained a government appointment as geologist to the Ordnance Survey, becoming its first Director in 1835. Although Roderick Murchison caused a major controversy by doubting the competence of De La Beche’s earlier work on Devon he was later vindicated, and his 1839 Report on the geology of Cornwall, Devon and West Somerset gained widespread acceptance and cemented his position. He proved to be a brilliant administrator, increasing his staff – John Phillips was taken on as palaeontologist – and in 1845 securing the Geological Survey’s move from the Ordnance to become an independent body within the Office of Woods and Forests.

De La Beche was staunchly anti-religion, trusting in close scientific observation and analysis. Knighted in 1842, he would be made Companion of the Bath in 1848. He was a member of Council of the British Association on its return to York in 1844. He died in London on 13 April 1855, and was buried in Kensal Green cemetery. 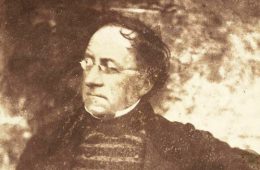