Sir John Frederick William Herschel was an English polymath, mathematician, astronomer, chemist, inventor, and experimental photographer, who also did valuable botanical work. He was born in Slough, Buckinghamshire on 7 March 1792, the only child of the internationally known astronomer William Herschel, who in 1781 had discovered Uranus. Graduating in 1813 from St John’s College, Cambridge, as an already published mathematician, he was elected Fellow of the Royal Society that same year at the age of 21. To mathematics he added the study of astronomy three years later under his father, and when William died in 1822, John continued his work. Three times President of the Royal Astronomical Society, which he had helped to found in 1820, he made a particular study of double stars and nebulae. He was a member of a British Association Committee “for revising the Nomenclature of the Stars” formed in 1840 that gave its report at the 1844 meeting in York.

He then developed an extensive knowledge of and interest in chemistry, mechanics, optical science, acoustics and electricity, and in 1830 published the highly influential Preliminary Discourse on the Study of Natural Philosophy. He was knighted by William IV in 1831. His Treatise on Astronomy of 1833 was followed by four years spent with his wife and their first three children at the Cape of Good Hope in Southern Africa, to observe the celestial objects of the southern skies. Whilst there he also took the opportunity to explore the flora, fauna and geology of the region, which is thought to have had a certain influence on the thinking of Darwin. He was greeted with acclamation on his return in 1838, by which time he had three more children (he and his wife Margaret would eventually have twelve), and given a baronetcy at Queen Victoria’s coronation.

From 1839 he undertook important experiments in the new science of photochemistry, seeking ways to progress further on the initiatives of Daguerre and Fox Talbot, and introducing the terms ‘positive’, ‘negative’, ‘snap-shot’, and ‘photograph’. He was President of the BA in 1845 and by 1850 was the most eminent scientist in Britain. From 1850 to 1855 he was also Master of the Royal Mint, a position once held by Isaac Newton, but which took a toll on his health. His Treatise on Astronomy was updated as Outlines of Astronomy in 1871, showing the evolution of his and others’ ideas in the interim, and went through eleven editions. Despite severe rheumatism and bronchitis in his later years he continued to write prolifically. When he died in 1871 he was buried next to Newton in Westminster Abbey. 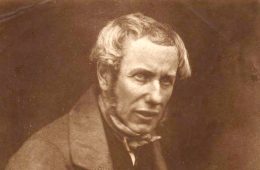