He married Louisa Augusta Venables Vernon, 2nd daughter of the Archbishop of York, thus becoming the brother-in-law of William Vernon Harcourt, first president of YPS and co-founder of the British Association in York in 1831. When the BA returned to York for the 1844 meeting he served as a vice-president of the Statistics Section.

In the President’s address to that 1844 meeting, Sir John was gratefully commended as the man “who so generously protected the old age of the Father of English Geology”. This referred to Johnstone’s kindness in 1828 giving a roof and employment as his land steward to William ‘Strata’ Smith, who was out of work and homeless. He most probably first met him within two months of joining YPS, when Smith delivered a course of lectures in February 1824, bringing with him his nephew John Phillips. Phillips made such an impression himself that he was appointed first Keeper of the Yorkshire Museum which opened in 1830. It was Sir John Johnstone who provided the stone for this Museum. As president and benefactor of the Scarborough Philosophical Society he also donated stone from his estate for the town’s Rotunda Museum, the world’s first purpose-built geological museum, opened 1829 to house Smith’s collection of fossils. He died as a result of a hunting accident in February 1869. 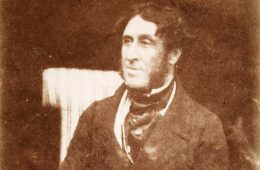