The calotype and its place in the development of photography

The calotype process was one of the earliest practical methods of producing photographs. The following notes attempt to provide a short description of the process, and to put it in context, now photography has become an integral part of the way we communicate.

In Latin) could be used to project an inverted image of the scene outside on to the wall opposite. A small version of this, known as a ‘pinhole camera’, involved making a pinhole in the centre of one side of a closed box. This caused light passing through the hole to project an image on the opposite wall of the inside of the box. This part of the box could be replaced with thin paper, allowing the image to be viewed from outside.

In the early years of the nineteenth century, many people tried to find a way to preserve these camera images. It was known that certain materials underwent change when exposed to light. In particular, various salts of silver turned black. If paper was treated with these to make it light-sensitive, and then placed over the camera image, the parts receiving light from the bright part of the image darkened, and those corresponding to the dark parts of the image remained light, producing a negative image. However, as soon as the paper was taken out to view the image, light could reach all parts of the paper, which caused the light areas to darken and the image to disappear. A method was needed to wash away, or otherwise deactivate, the silver salts which had not been darkened, so the image could be viewed without spoiling. This is now known as fixing the image. A method using a sodium hyposulphite (hypo) was demonstrated by astronomer and polymath  Sir John Herschel in 1839, and is still used in this type of photography.

Camera images could be improved by using a suitable lens instead of a pinhole, but another process was still needed to reverse the black and white of the negative, and create a positive image. 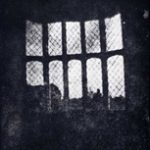 The descriptions above do not indicate the complexity of the chemical processes. Many people with an interestin chemistry struggled with different combinations of chemicals to find practical methods of creating successful images and obtaining a positive image from the negative. In England, the first person to succeed in this whole process was William Henry Fox Talbot. He did many experiments around 1834, but put the idea to one side, until in 1839 he heard that a Frenchman called Louis Daguerre had patented a different process, developed two years earlier. Daguerre treated a silver-plated sheet of copper with iodine vapor to give it a coating of light-sensitive silver iodide. After exposure in the camera, the image was developed by mercury vapor and fixed with a strong solution of ordinary salt (sodium chloride). The resulting images were very clear, but expensive, and unlike a negative-positive system, no further prints could be taken. Daguerre called his images Daguerrotypes. Fox Talbot hastened to demonstrate his own process, which he called the calotype (from the Greek kalos, meaning beautiful), and patented it in England and Wales in 1841.

A calotype negative began as a sheet of writing paper, which was treated with silver nitrate, dried and then soaked in a solution of potassium iodide. Immediately before taking a photograph, the paper was coated with a solution of gallo-nitrate of silver. 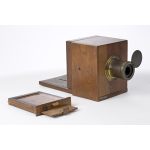 After exposure in the camera (which took from around ten seconds to several minutes, or even longer), the paper was washed with a fresh solution of gallo-nitrate of silver, and then fixed, to give a negative image. Much of the work described had to be done in darkness, or very dim light. The usual process to obtain a positive print involved another sheet of writing paper, which was first soaked in a solution of common table salt, dried, and then brushed on one side with a solution of silver nitrate, making it light-sensitive. The calotype negative was then placed on top of this and covered with a glass plate. Light was shone over it, causing the paper under the light parts to turn dark, reversing the image, which then needed to be fixed to produce what is known as a contact print. Tho learn more about calotypes, visit the website of the Calotype Society :-http://handmadeimagery.com/calotypist/about/

Others continued to try to find different methods of creating photographs. An important method known as the cyanotype was developed by Herschel, in 1842. 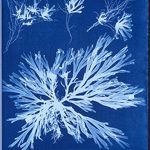 The process uses a mixture of two chemicals, ferric ammonium citrate and potassium ferricyanide. The prints, which are blue in colour, can be fixed by washing in plain water. (There are variants of this process. One uses initially only ferric ammonium citrate on the paper, then exposes it and washes It with potassium ferricyanide to give a positive violet image on a greenish-yellow ground.) The cyanotype is best used to make contact prints. This can be done by placing any flat object or drawing on the sensitised paper, instead of a negative. Some beautiful prints of seaweeds and leaves were produced, 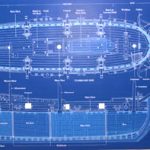 but its most important use was in reproducing architectural and technical drawings – the ‘blueprints’ that continued to be used till modern digital methods were developed.

Other methods of photography continued to be investigated, and some were discussed at the 1844 BA conference. Two methods reported were the Ferrotype, which used paper treated with succinic acid and nitrate of silver, then used sulphate of iron to process it, and the Electrolysotype which used iron sulphate instead of gallic acid to develop the image. These processes were derided by Fox Talbot, who was present.

The calotype continued to be the most successful method of photographing people and landscapes, and as Fox Talbot’s patent did not cover Scotland, the young Robert Adamson was able to set up in 1843 as a photographer using this method in Edinburgh. He was soon joined by David Octavius Hill, a portrait painter, and between them they created a body of work which is extremely well regarded. They were encouraged to obtain permission from Fox Talbot to attend the 1844 BA conference and photograph the conference delegates. Sadly, the Hill-Adamson partnership came to an end in 1848, when Adamson, whose health was always fragile, died.

This was apparently invented almost simultaneously by Frederick Scott Archer and Gustave Le Gray. This process used a prepared glass plate which, in the darkroom, would be coated with collodion (a highly flammable solution of nitrocellulose, ether, and alcohol). It was then made light-sensitive with further chemicals and before it could dry, was placed in the camera and exposed, which required only two or three seconds. The plate would then be returned to the darkroom and developed, rinsed, fixed, washed, dried and varnished, making It ready for printing. The whole process needed to be completed within about fifteen minutes, so use in the field required a portable darkroom.

An alternative method, the dry collodion process, used humid (“preserved”) collodion. This did not need immediate development, but required much longer exposures, and so was usually only used for landscapes

Richard Leach Maddox invented the gelatin dry plate silver bromide process. This led to the invention of dry plate photography, which did not require the photographer to develop the plate immediately after exposure. This proved to be a highly successful process, which continued to be used into the 1920s.

In 1885, George Eastman started manufacturing flexible, paper-based photographic film. Although convenient, it produced rather poor results. In 1887 Reverend Hannibal Goodwin filed a patent for celluloid photographic film. The patent was not granted until 1898. In the meantime, George Eastman had already started production of this type of film using his own process. A lawsuit ensued and Eastman Kodak had to pay out more than $5 million ($111 million in today’s money). 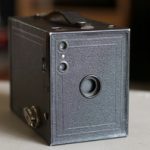 In this period there were many developments in cameras, lenses, film and ancillary equipment.

From the 1930s, the 35mm SLR camera, which combined the advantages of 35mm film used in the movie industry with the sophisticated single lens reflex (SLR) optical system, became popular with serious amateurs and professionals, while simple-to-operate, point and shoot cameras were produced for the mass market.

Increasingly practical processes for colour photography were introduced from the 1930s, and by the 1970s this became the norm for family snapshots.

It was usually necessary to develop and print images in a darkroom, though a system for taking instant photographs was introduced. This used ‘self-developing film’ to create a chemically developed print shortly after taking the picture. Polaroid Corporation pioneered consumer-friendly cameras using this film. However, there were drawbacks, as there were no negatives, so no easy method of obtaining extra prints or enlargements.

1975 The first ever digital camera was invented by Steven Sasson, an engineer at Eastman Kodak. Heavy, slow, and impractical in many ways, it needed much development before it could be in any way marketable.

1991 Kodak marketed the first professional digital camera. It cost $13,000, but allowed photojournalists to get their images back to their agencies with great speed.

Cyanotype by Anna Atkins This file has been identified as being free of known restrictions under copyright law, including all related and neighboring rights. Wikipedia

Blueprint of the galleon La Belle commissioned by Louis XIV, King of France
This file has been identified as being free of known restrictions under copyright law, including all related and neighboring rights. Wikipedia