Who attended the conference?

This conference was a very well attended event. Although the official report does not give a comprehensive list of who was present, the local newspapers went to some trouble to list them. ‘The York Herald’ of Sat 5 Oct reports the concluding meeting, and has a ‘List of Company’, giving the names of 651 gentlemen who attended the conference.

Plus, 9 issued to ‘young persons for admission to the Sections’, and ‘257 tickets issued to the ladies’.

Many famous scientists and engineers were present, including Herschel, Faraday, Wheatstone, Murchison, Sedgwick, Brunel, Stephenson, and many had aristocratic backgrounds, such as Spencer Compton, 2nd Marquess of Northampton, shown above.

Clicking on the PDF BAAS 1844 sections and locations will give a list of the officials and committee of each section, who were predominantly chosen from the most distinguished practitioners in their fields. (Please excuse transcription errors – we will try to give an improved list later.) The PDF also names the various buildings in the city which were used for hosting the different sections.

Calotypes taken at the conference but not included in the Exhibition

Clearly, with numbers like this, only a tiny fraction of the attendees could have been photographed. Sadly, many of the people we would really like to see do not appear to have taken advantage of this opportunity – perhaps they were just too busy. Herschel was photographed, but the other famous people listed above were not, and neither were our own Phillips and Vernon Harcourt, in spite of the fact that after the conference, the photographers moved to Bishopthorpe to take photographs of Harcourt’s father, the Archbishop of York, and other family members. However, those calotypes which do exist still give us a wonderful insight into the characters of scientists and others at that time, and we would like to provide this opportunity to see some of the photographs we have not been able to include in the display.

The PDFs which you can click on here give nineteen such images, and short biographical details of the sitters.

Along with those we are displaying, we believe these include most of the people taken, though many had several different shots. The largest collection of Hill and Adamson’s work is housed at the Scottish National Portrait Gallery, and we have taken all our images from their wonderful on-line collection. 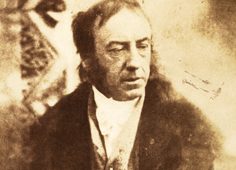