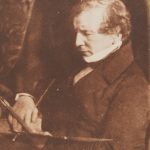 William Etty was born in Feasegate, York, on 10 March 1787, the son of a baker, Matthew Etty, and his wife Esther.  Following an unhappy seven years’ apprenticeship with a printer in Hull he moved to London, where he stayed with an uncle, and enrolled in the Royal Academy Schools with a keen desire to become an artist. His uncle paid for him to study for a year with Sir Thomas Lawrence, but it was John Opie’s lectures on Titian and Rubens that inspired him to paint the female nude. He would become one of the most famous, or notorious, artists of the 19th century.

His first painting to make a splash in the annual Royal Academy summer exhibition was in 1821, Cleopatra’s arrival in Cicilia (now at Lady Lever Art Gallery, Port Sunlight). He was accorded widespread praise here and in similar classical scenes that followed, invariably featuring many nudes, for his ability to paint realistic flesh tones. Not all who saw them approved, however, and he faced accusations of gross indecency. Either way, both critical and commercial success resulted. He moved into an apartment in Buckingham Street, near the Strand, where his niece Betsy joined him as his housekeeper, and there they remained for the rest of his working life. In February 1828 he was elected one of the forty Royal Academicians. He defeated John Constable in the ballot by 18 votes to 5.

Hearing of this recognition, the Yorkshire Philosophical Society followed suit, granting Etty honorary membership. Few artists and writers received this accolade, or were elected ordinary members, in a society that was scientifically Philosophical but never Literary. But Etty had never lost interest in his native York, and was prominent, along with leading figures of the newly formed YPS, in campaigns to preserve the bar walls against demolition, and to gather ‘antiquities’ into the society’s collections.

In addition to history paintings Etty also painted portraits and still lifes. One of his finest works is an 1832 portrait of York surgeon James Atkinson, one of the three founders of the YPS (York Art Gallery). It was shown in the gallery’s major retrospective of Etty’s work in 2011-12, staged 100 years after a similar retrospective to accompany the unveiling of his statue in Exhibition Square in 1911. As tastes changed in the late 19th century public and critical interest in Etty had declined, a situation that changed little in the 20th, although in York his statue served as a constant reminder to residents of their most famous local artist. His preoccupation with nudes continues to divide opinion, but his name is once again widely known and respected. There are substantial holdings of his works both in York and at Tate Britain.

A shy, withdrawn character, he retired to York in poor health in 1848, dying on 13 November the following year in the house he had bought in Coney Street, from which he could view the river. He was buried, not in the Minster as he had hoped, but in St Olave’s churchyard. His tomb can be seen from the Museum Gardens, through the ruins of St Mary’s Abbey.