Geologist and Honorary Member of the YPS 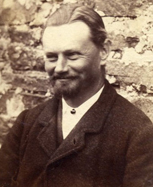 Fox-Strangways was born on 13 February 1844 at Rewe, near Exeter, where his father the Rev. H. Fox-Strangways (a grandson of the first Earl of Ilchester) was the Rector. He went to school at Eton and thence to the University of Göttingen where he studied mainly chemistry, mineralogy and physics. He was there during the war of 1866 when Prussia invaded Hanover and he assisted Sartorius von Waltershausen, the Professor of Mineralogy and Geology, to conceal his collection of minerals for safety.

Returning to England, he joined the staff of the Geological Survey under Murchison in 1867 as an Assistant Geologist and proceeded to the rank of Geologist in 1869. He started work in Yorkshire and mapped large areas of the county (for which he developed a deep affection) until his transfer to Leicestershire in 1889. From1901 to his retirement in 1904.he was a District Geologist.

Work in the Geological Survey

His first field work was done in the Carboniferous of Yorkshire around Todmorden and Halifax. Later he worked on northern parts of the coalfield near Bradford and Ingleton. He continued mapping further east around Harrogate and Knaresborough, and from there across the Vale of York into the Jurassic and Cretaceous rocks of the Eastern Moorlands (in which he retained a lasting interest) and the Wolds, eventually extending into North Lincolnshire. His work was highly regarded by his colleagues. Many of his maps were published on the six-inch as well as the usual one-inch scale. During the time of his work in North Yorkshire and East Yorkshire he made his home in Scarborough but he removed to Leicester on his transfer to the Midlands and to Hampstead on retirement.

As a member of the Geological Survey Fox-Strangways contributed to 22 Memoirs of the survey, and was fully responsible for a number of them notably his two volumes on The Jurassic Rocks of Britain (Yorkshire) but also five others relating to Yorkshire including one on the underground water supply of East Yorkshire, as well as sheet memoirs. Second editions of some were published.

In addition to his formal work for the Geological Survey Fox-Strangways wrote a number of papers in the Proceedings of the Yorkshire Geological Society: on the Harrogate Wells (1885), Glacial Phenomena near York (1895), The Coast Between Redcar and Scarborough (1898) and The Coast Between Hayburn Wyke and Filey (1898). He also contributed an important paper on the Valleys of North-east Yorkshire and their Mode of Formation to the Transactions of the Leicester Literary and Philosophical Society.(1894).

Fox-Strangways died on 5 March 1910, still working on the compilation of a comprehensive Bibliography of Yorkshire Geology from 1534 which he had almost completed. His manuscript was taken over by the Yorkshire Geological Society, completed, and published in 1915.

I am grateful to Dr Sarah King of the Yorkshire Museum for providing me with a copy of the obituary notes on Fox-Strangways in the Quarterly Journal of the Geological Survey.

The picture of Fox-Strangways is reproduced with permission of British Geological Society © NERC 2016.