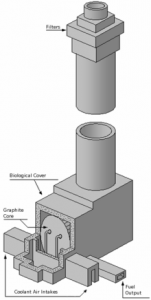 Did you know that the foresight shown by atomic scientist Sir John Cockcroft, in insisting on fitting high-efficiency filters in the flue-stacks of the nuclear plant in Windscale, Cumbria, had a major effect in reducing the damage caused by the accident in 1957? These filters, which were a late addition to the design, and created a strange bulge in the chimney stacks, had been widely believed to be unnecessary, and were frequently referred to as Cockcrofts Folly    until the accident demonstrated just how valuable this feature had been.

Sir John Douglas Cockcroft is best known for his work in Atomic Physics. In 1951, he and his colleague Ernest Walton received the Nobel Prize, “for their pioneer work on the transmutation of atomic nuclei by artificially accelerated atomic particles”- popularly referred to as splitting the atom.

John Cockcroft was born in Todmorden, a market town in West Yorkshire, close to the Lancashire border, on May 27th, 1897. He attended Todmorden Secondary School, where his Physics teacher, Luke Sutcliffe was later to go on to teach another Nobel prizewinner, Geoffrey Wilkinson, who won the Nobel Prize for Chemistry in 1973. Cockcroft left Todmorden to study mathematics at Manchester University. The First World War interrupted his studies, and he served as a signaller in the Royal Field Artillery before returning to Manchester to study electrical engineering at the College of Technology.After two years, he went to St. Johns College, Cambridge, and took the Mathematical Tripos in 1924, before starting work in the Cavendish Laboratory, under Lord Rutherford.

In this prestigious institution, he began working with Pyotr Kapitsa, developing techniques for creating ultrastrong magnetic fields by injecting high current for brief periods into specially constructed air-core electromagnets. In 1928 he changed his research, and began to work instead on using high voltages to accelerate protons. He was soon joined by Ernest Walton, and together they built an apparatus which became known as the Cockcroft-Walton Machine, in which to use these accelerated particles to bombard light atoms, with the object of causing them to disintegrate. In 1932 they bombarded the nucleus of the lithium atom and were able to identify the products of disintegration as helium nuclei. In 1933, they managed to produce radioactivity and a wide variety of transmutations. It was this work for which, in 1951, they were jointly awarded the Nobel Prize for Physics. In 1939, Cambridge University appointed Cockcroft as Jacksonian Professor of Natural Philosophy, but war was to intervene in his career for a second time. 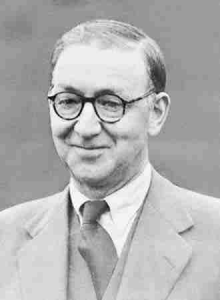 Before war was declared, Cockcroft had been already been approached by the inventor of Radar, Sir Robert Watson Watt, who recognised the importance of this new secret weapon in the conflict which seemed imminent. He persuaded Cockcroft to release one of his best scientists to manage the radar research program, and about 80 researchers to learn about radar so they would be ready if war were declared. After the sinking of the battleship Royal Oak in Scapa Flow, Cockcroft began working on Coastal Defence radar, and in 1940 he was a member of the Tizard Mission to the USA, sharing radar secrets with the Americans. In 1944 he went to Canada to take charge of the Canadian Atomic Energy project until 1946 when he returned to England to as the first Director of the Atomic Energy Research Establishment (AERE), Harwell.

Sir Johns task was no less than to plan the whole development of Britains atomic power program. The Harwell endeavour was to cover the whole compass of nuclear research, from prospecting instruments for uranium to the handling of spent reactor fuel, and including developing isotopes for industry and medicine. Fifty percent of the effort was in basic research, the rest in production and applications. Before 1959, when the UK program was slowed down, the establishment had grown to employ over 6,000 workers in about 100 buildings. It was while he was holding this post that Cockcroft made the far-seeing decision to insist on the filters on the Windscale stacks. Derided at the time, they were hugely valuable in reducing the damage when one of the reactors caught fire.

In 1959 Sir John was appointed first Master of Churchill College, Cambridge, which post he held till his death in 1967. He was also Chancellor of the Australian National University, Canberra, from 1961-1965, President of the Institute of Physics, the Physical Society (1960 to 1962) and the British Association for the Advancement of Science (1961 to 1963). Sir John married Eunice Elizabeth Crabtree in 1925 and they had four daughters and a son.

his Nobel  Lecture , Experiments on the interaction of high-speed nucleons  with  atomic nuclei is at:  http://www.nobelprize.org/nobel_prizes/physics/laureates/1951/cockcroft-lecture.pdf 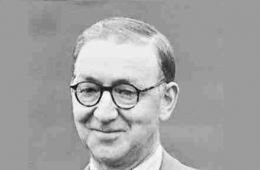