Joseph Priestley  is one of Yorkshires most famous and perhaps most significant scientists.  He is best known for discovering oxygen  a simplified description of the quite complicated process of producing, identifying and characterising the gas which was undertaken over a number of years with contributions from Carl Scheele and Antoine Lavoisier as well as Priestley.  This in itself is reason enough to commemorate him, but it is actually only one of his many scientific achievements and innovations, others of which include:

This impressive list would make Priestley one of Britains most celebrated scientists. However, despite being recognised by his peers (he received the Royal Society Copley Medal in 1772), his distinctly anti-establishment position on politics (support for the American and French revolutions) and theology (a life-long dissenter and one of the founders of the Unitarian Church in England) led to his being despised by many of his compatriots. His full life story is a fascinating insight into almost all aspects of the Enlightenment movement in the late eighteenth century.  It is impossible to do justice to his biography in this short article but, an overview of his life can be presented as part of a grand tour of the places that Priestley lived and worked. The following is then a chronological list of the various locations associated with Joseph Priestley.  Some of the buildings still exist but the location of many of those that are no longer standing have been marked by commemorative plaques.  Enjoy the tour and, if you are passing by any of the sites listed, see if you can find the buildings and plaques mentioned. 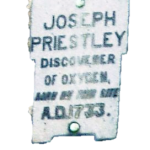 Joseph Priestley was born at Fieldhead, Birstall in 1733. The original house no longer stands but a plaque marks the site and a statue of Priestley stands in Birstall town centre.

Joseph, being one of six children, only lived here a short time before being sent away to live with his uncle on a farm at Shafton until the age of four. A few years later, he returned to Fieldhead when his mother died but was soon sent away again to his aunt Sarah at Old Hall, Heckmondwike when his father remarried. 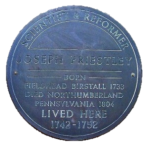 Plaque at Old Hall, Heckmondwike noting that Priestley lived there [1]

A plaque on the front notes that scientist and reformer Joseph Priestley lived here 1742-1752″. Here, he was raised as a Calvinist but, not content with being an ordinary non-conformist, by the time he was sixteen, he had already started to develop his own dissenting theology.  His intellectual talent was demonstrated by his ability to master the languages: French, Italian, German, Arabic, Syrian and Chaldean. 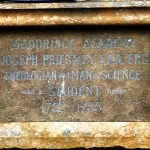 Plaque on 47 Sheaf Street, Daventry noting Priestley’s time as a student at the academy there [1]

Priestley left Yorkshire as a young man to complete his formal education at the dissenting academy in Daventry. Daventry academy was one of the first of its kind catering for those excluded on religious grounds from attending the Universities.

Here, he gained the qualifications which allowed him to take appointments to minister at various non-conformist chapels around the country. The building where the academy was housed still stands on 47 Sheaf Street (with a plaque to note Priestleys residence there). 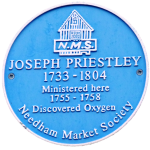 Once Priestley had gained his qualifications to practice as a clergyman, he took his first appointment in Needham Market, Suffolk.  Unfortunately, Priestleys brand of dissenting philosophy was not to the taste of the local congregation and he was not a popular character there. The site of Priestleys chapel is now occupied by a later United Reformed Church. A blue plaque on the building commemorates his time there. 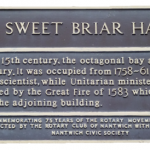 Plaque on Sweet Briar Hall, Nantwich noting Priestley’s time there (His school house is to the rear of the building) [1]

After three trying years in Suffolk, Priestley was offered an appointment in Nantwich, Cheshire.Here, he was much more welcomed and respected. He was able to open a school teaching languages and science. Priestleys house still stands and can be found at the rear of the Elizabethan Sweetbriar Hall on Hospital Street. 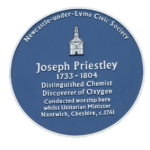 While in Nantwich, Priestley also ministered at Newcastle-under-Lyme: a plaque on the wall of Newcastle Unitarian Church notes this. During these years, Priestley wrote a book on grammar, which was one of the first publications in what was to become a prolific writing career. 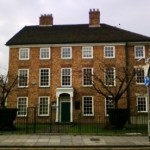 Priestleys reputation for operating the school in Nantwich eventually led to his appointment as tutor at the recently established dissenting academy in Warrington. It was at Warrington that his interest in teaching science (natural philosophy) developed into researching and publishing on the subject too. By 1765, Priestleys interest in the latest developments in electricity prompted him to travel to London to meet with Benjamin Franklin, the recognised expert on the subject. 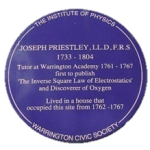 Priestley then set about writing The History and Present State of Electricity  an authoritative work supported with some of his own experiments.  In the course of this work, he proposed that the force between two electric charges is inversely proportional to the square of the distance between them: the first statement of what was to become known as Coulombs Law after Coulomb proved it by accurate measurement. The site of the later Warrington academy is occupied by a Salvation Army citadel  a plaque notes the contribution to physics made here. 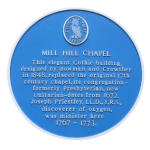 Plaque on Mill Hill Chapel, Leeds noting Priestley’s time there as a minister [1]

In 1767, perhaps for family reasons (he had married in 1762 and his daughter was born in 1763), Priestley decided to move back to his native Yorkshire. He took up appointment as minister at the Mill Hill Chapel in Leeds.  The building currently on the site in City Square was built later. However a plaque notes Priestleys incumbency. Across the square is his statue.

In Leeds, Priestley made his first serious researches in to the study of airs (gases).  One of his most significant discoveries was made in the brewery next door to his house in Meadow Lane (neither exists now). Here, he discovered that fixed air (what we now know as carbon dioxide CO2) was produced by the fermentation process. Among the many experiments on the gas he performed, one involved dissolving the gas into water: he thus invented artificially carbonated water. 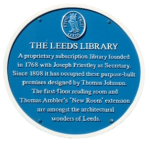 Plaque on Leeds Library noting Priestley as the founding Secretary [1]

This was a discovery that he did not benefit from himself but a few years later J.J. Schweppe was to exploit the commercial potential of soda water.

Also while in Leeds, Priestley went on to show that air was depleted of goodness by burning such that mice could not breathe it. Furthermore, if a small plant such as mint were put in the same air it became, after some days, good enough for mice to breathe it again. This was his first evidence of the carbon cycle and  the nature of what was to become known as oxygen. Thus were some truly important discoveries in the history of science made in Yorkshire.

Calne 1773-1779
Priestley gained notoriety through his publications and this brought him to the attention of William Petty, the 2ndEarl of Shelbourne who recruited him as librarian and tutor. Shelbournes country house was Bowood near Calne in Wiltshire. 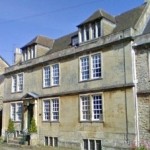 Priestley and his family therefore moved to Calne in 1773, initially to a house on The Green which still stands.In 1774, Shelbourne and Priestley went on a grand tour around Europe during which they met Antoine Lavoisier in Paris. Just prior to this trip, Priestley had produced a new gas from heating calx of mercury (now known as mercuric oxide, HgO). He reported this discovery to Lavoisier.On his return from France he went on to characterise this gas and identify it as dephlogisticated air in accordance with the erroneous but widely accepted theory of phlogiston. 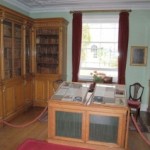 In the meantime Lavoisier started investigating the same gas. Lavoisier gained a better insight into the underlying process and, rejecting the concept of phlogiston, proposed a new theory and named the gas oxygen.  Interestingly, a few years previously, Carl Scheele in Sweden had made similar discoveries but did not publish his findings until after Priestley and Lavoisier. The claim of discover of oxygen therefore does not belong with any individual and all three of these scientists are given shared credit.

During his years working in Calne, Priestley also produced, characterised and identified many of the other gases including sulphur dioxide (SO2), nitrous oxide (N2O), nitric oxide (NO) and ammonia (NH3).  The room where he kept his laboratory can be viewed at Bowood House. A plaque placed by the American Chemical Society marks it as a Historic Chemical Landmark.

Birmingham 1780-1791
The job of librarian/tutor for Lord Shelbourne came to an end in 1789 and the Priestley family moved to Fairhill in Birmingham where Joseph had connections in the Lunar Society, a circle of intellectuals and industrialists including Erasmus Darwin, Mathew Boulton, James Watt and Josiah Wedgewood. 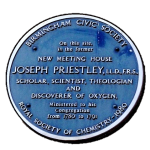 He was also able to return to ministering to a congregation at the New Meeting House (the site of which is marked by a plaque on a church in Moor Street).  He continued with his chemical experiments on gases and completed his six-volume work Experiments and observations on different types of air in 1786  an immensely important work in the development of the new science of chemistry.

Priestley was increasingly involved with and outspoken on political matters and expressed support for American independence and the French Revolution. 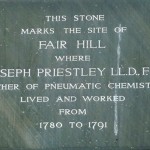 This, of course, identified him as distinctly anti-establishment. Eventually, as fear of the radical politics of revolution increased in England, Priestley became demonised as a threat to the established church and King. This culminated in the eponymous Priestley Riots in Birmingham in 1791 which resulted in his house at Fair Hill and the New Meeting House being razed.  There are now no remains of Fair Hill house but a plaque marks the site near to the street named Priestley Road. 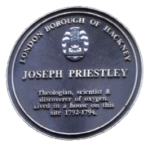 Having narrowly escaped with his life from the riots in Birmingham, the Priestleys moved to Hackney in North London.

They lived for a two years at a house on the site of what is now 113 Lower Clapton Street (marked by a plaque). 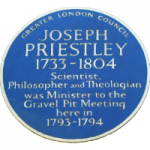 Plaque in Ram Place, Hackney noting Priestley’s time there as a minister [1]

Priestley continued to minister to dissenting congregations, mainly at the Gravel Pit chapel in Ram Place (also marked by a plaque). Having lost all his scientific equipment and many books at Fair Hill, and having to keep a low profile politically led to Priestley making to decision to emigrate to the United States of America. 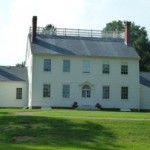 As a libertarian and radical theologian, the United States was a much more amenable place for Priestley to live.  With the help of Thomas Jefferson and John Adams, Priestley found a suitable plot of land to purchase in Northumberland County, Pennsylvania.  He would eventually build a large house on the banks of the Susquehanna river complete with a chemical laboratory. 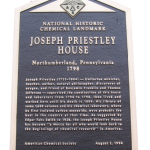 Although not as active as in his years in Calne, he managed to add carbon monoxide (CO) to his list of discoveries before retiring completely. He died at his home in 1804.  The house is now preserved as a museum and is marked as a Historic Chemical Landmark by a plaque placed by the American Chemical Society.

Joe Jackson, A World On Fire – A heretic, an aristocrat and the race to discover oxygen, Penguin, 2005

Robert E. Schofield, The Enlightenment of Joseph Priestley  A study of his life and work from 1733 to 1773, Pennsylvania State University Press, 1997

Robert E. Schofield, The Enlightened Joseph Priestley  A study of his life and work from 1773 to 1804, Pennsylvania State University Press, 2004

William Dargue, A History of Birmingham Places & Placenames . . . from A to Y (for notes on the location of Fair Hill), http://billdargue.jimdo.com 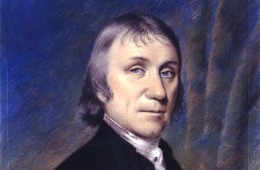