Only a very few patented inventions are successful.  The great majority fade quietly away. Percy Shaws Catseye® road studs are an example of how patents and trade marks can be the foundation for a successful business  the firm he founded is still thriving, decades later. Many inventors dont patent their ideas  because they dont know how, or think it is too expensive  so they lose this option. 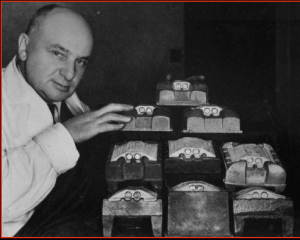 Percy showed both commercial and mechanical ingenuity from an early age.  With ten older siblings and half siblings, two younger ones, and a father who earned a pound a week as a dyers labourer in a local woollen mill, all of the children had to help with the chores. The family lived in Boothtown, then a village near Halifax in Yorkshire, but now overtaken by urban sprawl. Sometimes the large garden produced more fruit and vegetables than the family needed, and Percy Shaw sold the surplus in the local village using a donkey cart.  He also grew herbs specifically for sale at a penny a bunch.

Percys father was adept at mending things around the house and making toys from oddments, Percy learned simple repair skills at an early age. One of his fathers sidelines was mending the heavy manual mangles universally used on domestic wash days, and father and son used a nearby stable as a workshop.   Percy Shaw left school aged 13, and worked first as a labourer. He soon realised there was no future in the heavy repetitive work, so he learned shorthand and bookkeeping and got a job in a factory office. In an early show of quick thinking and initiative, he prevented a fire in the factory from becoming a serious outbreak by running up the hill to cut off the general gas supply. The whole village was then without gas, but the action met with approval and he was awarded a weeks wages  7/6d.  At the time his father was in danger of losing his job, so, showing his family-oriented attitude, he spent the money on a second-hand treadle and lathe to make mangle-repairing much easier.

Deciding to learn a trade, he became a low-paid apprentice to a manufacturer of wires and knives for looms. He learned quickly, and was valuable to his employer, but his wages remained low.  At home, there was another financial crisis, (a sibling leaving to get married would reduce the income to the household), so he broke his 7-year contract.  He then worked in several industries and learned welding and machine-tool making; one job was in a carpet factory and he invented a way to provide rubber backings, foreshadowing the foam-backed carpets we know today, but is was not taken up at the time.

His family was important and life was not all work.  The parents and children were musical  Percy played the flute and the violin  and even formed their own orchestra; one brother became a professional musician on cruise liners. He lived in the family home in Boothtown from the age of two until his death.  He never married but was always looked after by an unmarried or widowed sister throughout the decades.

His father lost his job when the mill he worked in closed down, so father and son set up as full-time mangle repairers, and did many other odd  jobs. When motor cars began to become popular, Percy repaired them and invented a way to re-metal big ends, saving the need to send the faulty item to the manufacturer, the car in question being off the road for a considerable time. In 1914 a local mill was awarded a contract to make khaki puttees, and, with his knowledge of looms and carpet making, he secured a contract to make the special wires which the mill required.  This was done in the family workshop, and soon father and son bought an old blacksmiths forge and also began to make cartridge cases under a government contract.

The family now prospered.  Percy bought first a bicycle, which in the early years of the twentieth century was still a rarity, and with two friends he cycled to London; the journey took three days but was a huge success. It was his first ever holiday.  By 1916 Percy could afford a second-hand motor bike and then a model T Ford.  He loved tinkering with cars and set up a barter business in cars just so he could repair them.

In another change of direction, Percy set up a business to lay asphalt and tar macadam on private roads and garden paths.  He found that the small roller used to compact them was small and slow so he invented a miniature motorised version.  Soon he was employing several men to do the work while he travelled round Yorkshire securing orders.

Driving home after dark, he often noticed that the reflection of his headlights from the tramlines recently laid in the Halifax area gave a good indication of the line of the road. One night, on a familiar but dangerous stretch of road, the tramlines had been taken up for repair, but, so the story goes, he saw two pinpoints of light  from the eyes of a cat by the roadside. The kernel of his best idea came to him  why not put reflectors like this along the road? (Shaw never commented on this story: it may originate with Cecil, one of his brothers.)

He began a lengthy process of trial and error, testing out different types of glass in different shapes, finding a resilient filling to hold it in a metal cup to set in the roadway.  He even had to design his own optical test tunnel using an old oil drum.

Early in 1934 Percy decided that he needed patent protection and visited a firm of patent attorneys, Appleyards, in Halifax. Mr Appleyard advised that three separate patent applications were needed and they were filed on 3 April 1934. All three resulted in granted patents, including GB436290. On 15 March 1935 Percy set up Reflecting Roadstuds Limited, a company which still exists and is still located in Boothtown. Shortly afterwards he applied to register the word Catseye as a trade mark and the registration is still in force; anyone can sell roadstuds but they cannot call them Catseyes ®. In another astute move shortly afterwards, he took into partnership a Solicitor, Mr Burr, who wanted to work in industry, so business and negotiating skills were on hand.

Readers will have seen such road studs many times.  A cylinder of glass with a curved reflective rear surface is set horizontally in a rubber pad held in a metal support.  The pad projects slightly above the road and car headlights are reflected back to the driver by the curved surface. When a vehicle wheel passes over the pad, the glass cylinder is pressed down past a rubber flange which cleans the surface.

As with so many inventions, a long period of setbacks and frustrations now began.  Percy kept on improving his design.  He also used his road-laying expertise to dig up a road (without authority), install a road stud, try it out with his own car headlights, reinstate the road, and take the stud home to work on it. 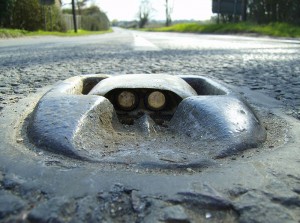 When he was satisfied with the design, he approached the local road maintenance authorities in Halifax, Leeds and Bradford, and the Yorkshire West Riding County Council. In 1935 he was allowed to demonstrate his invention – at his own expense. He was permitted to install 50 studs at a notoriously foggy crossroads between Leeds and Bradford. Orders did not flood in.  The first was for 36 studs for use near Bradford.  Leeds Highways Dept then ordered a hundred studs, then another hundred three months later. In 1937 the Minister of Transport arranged for a five mile stretch of road in Oxfordshire to be a test bed for several types of road studs  Percys was not the only one available, but the test showed that his was the only satisfactory one. In spite of this, orders still came in painfully slowly until World War II and the black out  he was asked to visit Whitehall and the result was funding to allow supply of 40,000 studs per week. Orders now poured in, and so did tributes from grateful drivers. Manufacture took place in Boothtown, of course.

In 1941 the Japanese Army entered Malaya and supply of rubber plummeted; the company was allowed only a small quota. Scrap rubber did not work, but old crepe soles, treated with alcohol and petroleum, gave a usable material. Production fell to 12,000 a week.

After the war, Percy Shaw became famous. He was interviewed by Richard Dimbleby for the radio programme Down Your Way and later by Alan Whicker for Yorkshire Television. In the House of Commons, the road stud was described as The most brilliant invention ever produced in the interests of road safety.  In July 1949 the then Princess Elizabeth visited Halifax, saw a display of road studs, commented knowledgeably and asked to meet the inventor.  He was awarded the OBE for services to exports in 1965.

Road Reflecting Studs Ltd prospered and it is still located in Boothtown, Halifax: it ships over a million road studs worldwide each year.

Commercially, Percy showed an early realisation of the importance of overseas markets by filing patent applications in the USA and Canada and in several European countries.  His inventions extended into areas including manufacture of pile fabrics, and cycle pedals, reflecting his work and leisure experience in his teenage years.

Records of stories told by friends and relatives show that he was a generous man who loved parties and story-telling, and the Black Dyke Mills Band. In later years he enjoyed golf and smoking his pipe, and driving around in his Rolls Royce.

He is remembered by his patent attorneys, especially in his later days when he was a wealthy man.  Visiting the office one day to discuss his latest idea, he was asked to remove samples of earlier roadstuds, and a new recruit was told to carry them down to his car. Struggling to open the boot of a Morris Minor parked outside the office (as one could in those days), Percy arrived and said to him Nay lad, thats not car, thats car over tother side. Parked near the top of Princes Arcade was a shiny Rolls Royce with uniformed chauffeur. Percy then went to the market to buy tripe for his lunch, which he ate with his fingers seated in the back of his car. This was a change from his regular lunch at the Co-op café in Northgate, costing 1/9d.

Locally he is not forgotten.  In 2006 the Halifax Courier ran a competition to find Calderdales most famous son or daughter and he was the clear winner. In the same year his road stud was in the top ten of the BBC Culture Shows top British Design Awards.

The Oxford Dictionary of National Biography 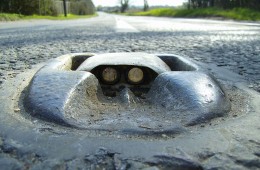