Imagine a world where your phone is too big for your hand, where your doctor prescribes a drug that is wrong for your body, where in a car accident you are 47% more likely to be seriously injured, where every week the countless hours of work you do are not recognised or valued. If any of this sounds familiar, chances are that you’re a woman.

Invisible Women shows us how, in a world largely built for and by men, we are systematically ignoring half the population. It exposes the gender data gap–a gap in our knowledge that is at the root of perpetual, systemic discrimination against women, and that has created a pervasive but invisible bias with a profound effect on women’s lives. From government policy and medical research, to technology, workplaces, urban planning and the media, Invisible Women reveals the biased data that excludes women.

“This prize celebrates great writing about science and the scientists who make it happen. There has never been a more exciting time for popular and accessible science writing. There is a huge appetite for books across all topics of science and writers who can explain and inspire, entertain and inform.”
Sir Nigel Shadbolt FREng FRS, Chair of judges 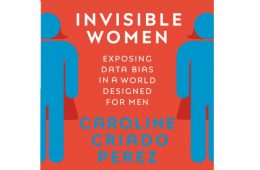