Astronomy, God & The Search For Elegance

This lecture will discuss how scientific theories must do more than merely satisfy the data; they must do so in a way that is (to use a term much favored by mathematicians) “elegant.”

Kepler, Maxwell, and Einstein are examples of scientists who found that a sense of aesthetic “rightness” helped them to direct their scientific intuition toward theories that could then be expressed rationally, mathematically; theories that could then be tested against nature. By looking closely at a handful of astronomical images we’ll explore the way that one proceeds from an emotional appreciation of the beauty of the stars and planets, to a deeper understanding that satisfies both reason and emotion. Ultimately, this link between “elegance” and rational truth has profound theological implications

In 2014 he received the Carl Sagan Medal from the American Astronomical Society Division for Planetary Sciences for excellence in public communication in planetary sciences. 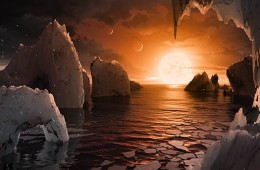