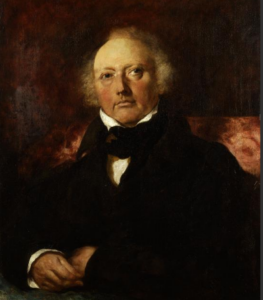 James Atkinson, surgeon, lived in a moderately imposing house in Lendal, now The House of the Trembling Madness. He practised medicine and surgery in York for many years, and had a large personal collection of anatomical specimens. He was presumably a competent surgeon, by the standards of the time: although there is a slightly worrying story that he was pursued around York by the ghost of one of his unsuccessful patients, who waved his incompletely amputated leg around like a flail … shouting “good cure, a good cure, that damned Dr. Atkinson!” This anecdote is related, in 1953, by a disaffected Keeper of the Yorkshire Museum who had his own reasons for denigrating, generically, the management of the Yorkshire Philosophical Society, so it may not be entirely true. Apart from the practical difficulties of a ghost standing on one leg while brandishing the other.

Atkinson was a person who attracted such anecdotes. He was an active member of the Doctors’ Club – also known as the Good Humour Club – which met in the York Tavern every Thursday evening, to pursue good humour rather than medicine; an ardent music-lover, who travelled to London especially to witness the debut of the great Niccolò Paganini, who later stayed with him in York; a friend of William Etty, who painted his portrait (now in the York Art Gallery); and a bibliophile who amassed a remarkable library.   On one occasion the fellow bibliographer, author and traveller Thomas Frognall Dibdin casually dropped in to a York bookshop, bought a copy of Atkinson’s book – and within 24 hours was being entertained to dinner by Atkinson and his daughter, regaled with tales of Paganini, and books, and conducted round the Assembly Rooms and Concert Room by his host.

James Atkinson’s book – Medical Bibliography. A and B. – sounds a trifle dull, but is as eccentric as the man himself.  It is dedicated “to idle medical students …”, consciously written, in part, in the style of Atkinson’s father’s friend Laurence Sterne (those familiar with Tristram Shandy may find this concept startling), and discusses many ancient authors whose contributions to medical science had long been forgotten, even in Atkinson’s day. One surviving copy is said to have been inscribed “Exceedingly scarce, nearly all the copies were destroyed at the urgent demand of his family”.  There is no sign of any intention on Atkinson’s part to continue the bibliography from C to Z.

James Atkinson, then, was an expert on comparative anatomy – but also “a gentleman and a man of varied talent … ardent, active, and of the most overflowing goodness of heart … ‘up and be doing’ from sun-rising to sun-set”,  to whom the Kirkdale fossils (and the founding of a Society) would prove irresistible.

Image: James Atkinson by William Etty (with thanks to York Museums Trust)