The Clerk in a City

The Eels of Ely

The name Ely is popularly thought to derive from its location in an area where eels were abundant, although there is doubt about this because it seems eels may have been known as anguilles until well after the city got its name.

The life cycle of this strange fish is the stuff of legend.  The eels of Ely breed three thousand miles away in the Sargasso Sea from where their larvae drift eastwards on the Gulf Stream, metamorphosing into transparent “glass eels” and then into elvers, which make their way up freshwater rivers, spending several years there before returning as mature eels to the Atlantic Ocean to spawn.  To add to their mythical properties, eels can live for many years, can survive out of water for several hours and their blood, before cooking, is poisonous.

Ely celebrates its eels in several works of art. They are etched on glass, laid out in a mosaic of archaeological pottery fragments, cast in galvanised steel (and subsequently yarn-bombed), while the forks and baskets once used to catch them are sculpted in steel and living willow. My favourite sculpture, because it was such a pleasant spot to sit and watch the world go by, was the circular bench around a tree, inscribed with the words of Mrs Elizabeth Cromwell’s recipe for roast eel.

A recipe collection, claimed to be that of Mrs Cromwell, wife of Oliver, was published four years into the reign of Charles II, seemingly aiming to discredit the couple, who lived in Ely before their rise to prominence, by revealing plain fare and poor housekeeping.  Eels, then a foodstuff of ordinary people, appear four times; roasted, boiled, in a pie, and in a pie with (equally cheap) oysters.  The starting point for all the recipes is to cut them in pieces “as long as you think convenient”.

A party of YPS members is presently exploring East Anglia and Cambridgeshire, including Ely.  I hope they enjoy the town as much as I did. 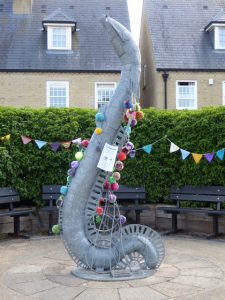 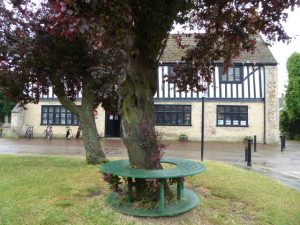