As anticipated, my spring-cleaning efforts stalled as soon as I opened a large box full of guide books, holiday snaps and marvellous memories, many of them from YPS trips and tours. For me a particularly noteworthy holiday was one of our rare ventures overseas to the Republic of Ireland in 2014. Based in the small town of Carlow, our busy itinerary gave us an overview of Irish history from dolmens and stone circles to a jacket worn by Michael Collins. There were visits to fine houses, castles, an emigrant ship, the atmospheric early Christian site at Glendalough, pleasant strolls through the National Heritage Park and the National Stud, as well as a whole day in Dublin. We enjoyed the peaceful rural scenery, the lilting accents and many delicious buttered scones, and in Waterford I experienced my own “Howard Carter” moment.

Left to explore at leisure after a visit to the Crystal factory, I chose quite by chance to join a guided tour of the Mediaeval Museum, home of Waterford’s Great Charter Roll. This document, four metres in length, was compiled around 1373 from fifteen separate vellum charters and sent to London in support of Waterford’s attempt to gain a monopoly on the unloading of ships in its harbour. To add impact to the request the roll was decorated with seventeen illustrations, showing five kings of England, four mayors of Irish towns, seven justiciars of Ireland (the king’s representative in the country) and a judge. We gathered around the large showcase to listen to our guide, but when the group moved on, I stayed rooted to the spot. By chance again, I’d positioned myself next to the depiction of John Darcy, justiciar of Ireland for several periods between 1322 and 1344. Among his rewards for long service to the Crown was land in Yorkshire; through my window I’m looking at some of it now.

It’s an uncanny experience to happen on a picture of a “neighbour” from several centuries ago. Although created within a lifetime of Darcy’s death in 1347, images of people at this time were representations rather than portraits, but as he was the longest serving justiciar of the 14th century, I feel that the white hair and worried expression may not be too far from reality. 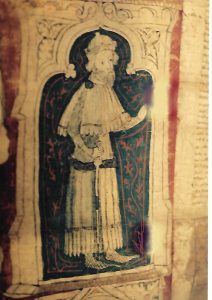