Tuesday 23rd June 2020
Tea and cake in the country

Exploring the depths of a drawer during my week off unearthed this old photograph of people looking as though they’re enjoying a picnic after release from lock-down. Or they may be farm workers partaking of “drinkings”, as the mid-morning or mid-afternoon snack is known round here. During harvest, when the working day continued until dusk, drinkings also meant the packed meal sent out to the fields at 5 o’clock. My mother and my grandmother before her both provided drinkings for many years. Each worker received two hearty sandwiches, one of cheese, corned beef or some other tinned meat and the other of tomatoes, a large scone, split and sandwiched together with butter, and a piece of cake, often gingerbread, which like the scones was freshly home-baked. Each element would be separately wrapped in greaseproof paper, and then packed together in a newspaper bundle for each man, and taken down to the field in wicker baskets with flasks of sweet tea. In older times lidded enamel jugs and enamel mugs were used for the tea. 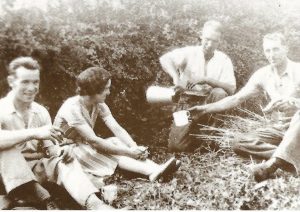