In response to the absence of wildlife photographs, one of my readers (or possibly my one reader) has sent in this picture of a wild wallaby on the Isle of Man. There are several groups of wallabies living wild in the UK, descended like this one from animals which have escaped from wildlife parks, but as far as I know there are none around here.  Perhaps Yorkshire parks have particularly secure fences, or escapees go home at teatime.

Meanwhile, an even more exotic creature may be heading in our direction.  A rare bearded vulture, making its way up the country from the Continent, is presently causing great excitement in the Peak District.  In case it decides to travel further north, I’m keeping my eyes peeled for something with a wingspan of up to 3 metres circling high overhead.  It would be roughly twice as big as the young osprey which called in here a few years ago, but far from the largest bird ever seen in the village; a farmer neighbour once kept a flock of ostriches. 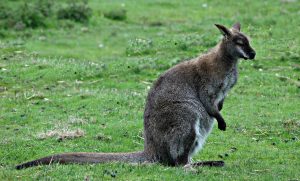