Another wildlife photo gratefully received from a reader: this field mouse was spotted at the Temple of Mithras near Hadrian’s Wall, but there are certainly plenty nearer home.  As a cat lover I’ve had many close encounters with mice over the years, including waking up to find one on my pillow.  Another desperate little creature made a bid for freedom straight up my arm and onto my shoulder before realizing its mistake and hurling itself into the void.  Both were eventually returned home.

Quite a lot of the “mice” around here are actually voles, like Beatrix Potter’s country mouse, Timmy Willie, with his rounded nose, smaller eyes and ears, and “insignificant” tail.  Then there are shrews, distinctively pointed in shape and, according to feline friends, tasting nasty. 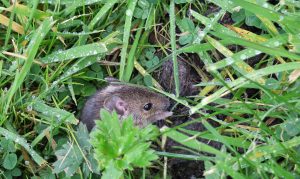