A Whale of a Time

The most exotic creature ever seen in these parts, and certainly the largest, was a fin whale, 68 feet long and weighing 58 tons.  By the time Jonah the Giant Whale visited Selby, it must have been dead and touring the country for several years already.  In those far-off days before colour TV and beautifully filmed wildlife documentaries, it drew curious crowds wherever it went.  Even the lorry on which it was transported was an object of wonder, said to be the largest in the country.

My childhood memories are hazy; I was still young enough to have to hold my mother’s hand.  I do know that it seemed to take an endless time to walk around the huge creature before we were able to escape the reek of formaldehyde.

A quick search on the internet reveals either that the whale was eventually incinerated in Barnsley or is lying in cold storage somewhere in Europe, awaiting a time when it will once again draw crowds.  I suspect the former may be more likely. 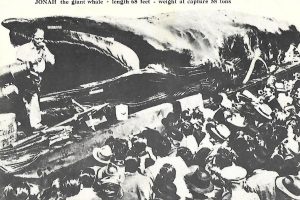