In praise of plants

Over the course of the last few months birds and animals have featured regularly in this blog but plants have been mentioned only as a source of food.  Time to redress the balance with a few of my favourites, which have provided company, inspiration and entertainment.

For sheer joie de vivre few things beat a row of runner beans, twirling up their canes until they spell out “Yippee” in wavery letters along the top, but the prize must go to a particularly lively squash, with a shoot which climbed up the compost heap and down the other side, found its way through a gap in the fence and was last seen romping across the meadow.

This time of year belongs to those stoic plants which have to put up with our habit of festooning them in tinsel.  Many years ago and in a previous job, a miniature Christmas tree was brought into the office; 8 inches tall, slightly lopsided where one of its tiny twigs was missing, and hung about rather cheaply with polystyrene cubes wrapped in tartan paper.  When the opportunity arose, I volunteered to look after it over the holiday.  Divested of the polystyrene cubes as soon as we arrived home, it already looked much happier and, at the far end of the garden, it now towers over me, still slightly lopsided where it lacks a sturdy branch.

More recently in a homewares store I came across a tray of echeveria plants which had been dipped in metallic glitter paint, like so many victims of Auric Goldfinger.  I chose one with a very small patch of green at the centre.  My attempts to remove the paint were unsuccessful; survival was up to the plant.  For weeks it stood inert.  Then, with spring well advanced, the patch of green began to look a little bigger.  It took two years to rid itself of the last vestiges of artificial colour, but here it is now, more decorative by far, in my opinion, than when it glittered with gold.

This will be the last entry until after the holiday.  By the time I write again, we will have marked, in a quiet way, the most important festival in the rural calendar.  To all readers (in the northern hemisphere!) I wish a very happy Winter Solstice. 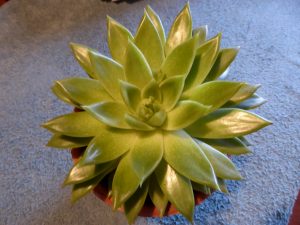