Back to school again

The early 20th century log books for our village school reveal a surprisingly wide-ranging curriculum as well as a busy time for the teacher, Miss Nattrass.  “I taught the Infant class Numeration and Addition,” she recorded one day, “Standard I Multiplication and gave Standards II, III and IV a Lesson on the Adjective and Map Drawing”.

Her list of Object Lessons for the Infants reflected their home life, both practical (Thimble, Flat Iron, Candle, Hammer, Hearthrug) and occasionally more pleasurable (Doll in week 5 and, last on the list, Sugar), the countryside around them (Bird’s Nest, Spider, Dandelion, Trees in Spring) and of course farming (Sheep, Corn, Potatoes) while the older children followed a History Scheme which took them from Ancient Britons to Caxton via King Egbert, Hereward the Wake, and the White Ship.

It was her moral guidance that came to the mind of a former pupil, reminiscing in the 1990s.   Mrs Gertrude Sims remembered Miss Nattrass as a strict teacher but who “always gave praise for work well done.  One thing she taught us was if a thing was worth doing, it was worth doing well.  Also, always speak the truth whatever the consequences.  School was opened and closed every day with prayer.”

Whether Fans formed one of the Object Lessons, or who provided the school with such splendid examples, is unknown.  My grandmother is one of the little girls keeping grimly still for the camera but, alas, if she ever told me, I have long forgotten. 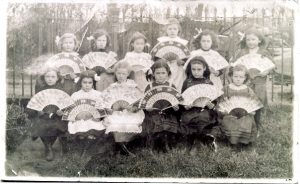