End of an era

Passing a milestone birthday recently set me thinking about my childhood, in a time which already seems part of history.  My earliest memory is of my mother lifting me up to look over a fence as, from the far side of a grass paddock, a huge dark shape made its way inexorably towards us.  “Say Hello to Tinker”, and a great head descended slowly to touch my trembling outstretched hand.

Tinker was the last of the carthorses and the only one left when I was born, but my childhood was peppered with reminiscences of Prince, who was inclined to be snappy, Punch (a Suffolk Punch, of course), and Depper who could plough a straight furrow.  The horses knew that setting off for home at the sound of the late morning train on its way to Doncaster would get them there right on time for lunch.  If the ploughman wanted to finish the row, the ensuing dispute must have resulted in a not quite so straight furrow.

It was the post-World War II years that brought the end of horses on farms here.  My grandfather was able to buy, cheaply, a metal ex-Army trailer; a fine piece of equipment, though heavier than a wooden cart.  Tommy, part-Shire, with all his strength and experience, managed to move it laden from a standing start, but it was too much to ask.  The next acquisition was a tractor.  One by one, as they reached the end of their working lives, the horses were not replaced, until only Tinker was left, living out a contented retirement in his paddock, called on only occasionally in his new role as a not very successful entertainer of a terrified toddler. 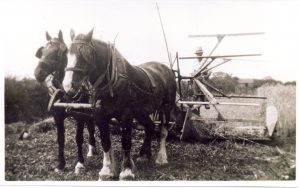