Several Woodpigeons have made their home in the neighbourhood of mine, but I’ve seen only one pair of Stock Doves (or perhaps only one pair at a time), pictured in last week’s photograph.  Noticeably smaller than the Woodpigeons (13” long according to the bird book), they have similar colouring but without the white markings.  With a beautiful iridescent green patch on the neck, a wide black edging to the tail and two parallel black bars on the wings, they also resemble some of the feral pigeons found in towns.

Last but not least, I regularly see a pair of Collared Doves, the most attractive of my “pigeon” neighbours, being all-over a delicate “dove” grey with just a black stripe at the neck; flying reveals some black on the wings and tail.  These gentle-looking birds have a slightly worried expression, as though symbolising world peace is a heavy burden to bear, but the Collared Dove’s meek appearance is deceptive.  Unknown here a century ago, its advance across Europe is likened by my big bird book to “a well-planned military campaign”.  In 1930 “the nearest Collared Dove to our shores was on the far side of the Danube … By 1947 they were in the Netherlands; by 1948 they had reached Denmark, and a year later it was the turn of Sweden.  They reached Belgium in 1952, and in that same year the first Collared Dove was seen in Britain …”  The RSPB website records a current population of 990,000 pairs.  Here is one of them. 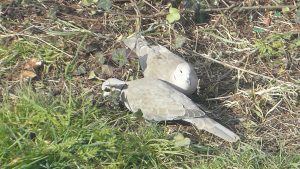