Regular readers may remember my reports of the demolition of Eggborough Power Station’s eight cooling towers in two stages last year.  It was thought at the time that the 200 metre tall chimney would be dismantled gradually but the implosion of the towers went so well that the decision was made to bring down the chimney this way too.

Last Sunday morning I armed myself with camera and bar of chocolate and joined the small but growing number of spectators stringing out along the road to the next village.  We knew the date but no time had been announced; hence the need for sustenance.  Just after 10 o’clock there was a loud bang.  For an instant nothing happened, then “There it goes” shouted someone and, smoke pouring from the top, the chimney sank below the tree line amid a huge cloud of dust.

Much better images than mine, and indeed film, of the event can be found online, but if you really crave excitement, keep an eye out for “Fast & Furious 9: Hobbs and Shaw”, a Hollywood action movie from 2019, partly made on location at the by then disused power station.  As the digitally enhanced musclebound representatives of good and evil do battle amid the cooling towers, the chimney joins in by falling full-length onto them – digitally of course.  A dramatic end in fiction and in reality to a plant once capable of generating 1960 megawatts of electricity, enough to supply 2 million homes. 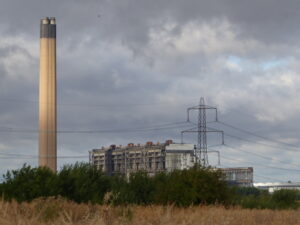 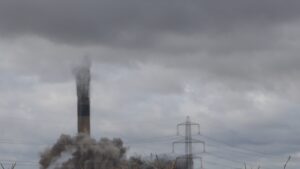 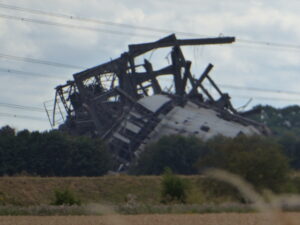