Following the discovery of the Kirkdale Cave and its contents in July 1821, word rapidly spread. Fairly soon practically everyone in Yorkshire with an interest in such things seems to have known about it.

John Gibson’s friend (and possibly relative) Dr Thomas Harrison of Kirkbymoorside was the first to know, and in fact may have been aware of the quarry before Gibson.  One of his daughters was married to Robert Petch who owned land adjoining the quarry and overlying parts of the cave. Harrison almost certainly discussed the cave with a local antiquarian, the Rev. Joseph Smyth, and with the Rev. William Eastmead, who later wrote extensively about Kirkdale in his Historia Rievallensis … (History of Ryedale), published shortly afterwards. As did Rev. George Bird in A Geological Survey of the Yorkshire Coast … (which appeared within a year of the discovery). The local Member of Parliament, Sir Charles Duncombe certainly took an interest, and acquired a selection of the fossils; his wife, Lady Charlotte, produced some excellent drawings of hyena jaws and the like.

In York, Kirkdale had come to the attention of several gentlemen who – although they didn’t know it at the time – were to become key figures in the future. William Salmond, retired Army officer, gentleman of means, was certainly there by September 1821, and by November was superintending the excavation, and carrying out a detailed survey of the entire cave; his friend, the eccentric surgeon James Atkinson, was assembling a collection of Kirkdale bones; as was the lawyer Anthony Thorpe.  And it is hard to imagine that the Rev. William Venables-Vernon (later better known as William Vernon Harcourt), a man of insatiable curiosity and an amateur geologist, was unaware.

Most, if not all, of these personages probably visited the site, and the more intrepid ventured into the cave.  As they flocked towards the cave, the actual specimens flew out.  All of those named above amassed collections, and there was a brisk local trade in bones scavenged from the quarry spoil heaps.  John Gibson took many, and distributed them to the Royal College of Surgeons, the Geological Society, Baron Cuvier in Paris, and elsewhere.  The Kirkdale Cave “is now become the rallying word to all the literati and virtuosi of London; a party of the most distinguished of whom met to dinner at the Freemason’s Tavern” to discuss the remains. 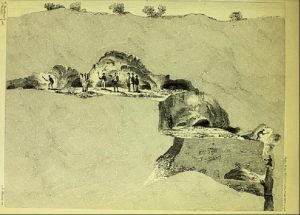