… at the speed of a stagecoach

Most significantly, word spread to the Rev. William Buckland, Reader in Geology and Mineralogy at Oxford, and a key figure in the subsequent history of the Kirkdale fossils. Buckland first heard of the Kirkdale discoveries from the Bishop of Oxford, Edward Legge, a brother of Lady Charlotte Duncombe, although various other sources of information were probably not far behind.  William Venables-Vernon, for example, had attended Buckland’s lectures at Oxford and the two were corresponding about Kirkdale within months of the initial discovery. And information travelled between learned gentlemen of the day at the speed – literally – of a stage coach. 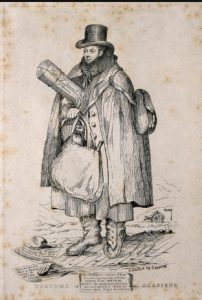 In any event, William Buckland (pictured here on a field trip) sped northwards, visited the cave in December of 1821, immediately started tracking the wayward fossils, and began work on his first great work on the subject: about which more, in a future blog …

Looking forward in time, as the above gentlemen (and lady) could not do, as we saw last week, the three who actually founded the Yorkshire Philosophical Society and the Yorkshire Museum – Thorpe, Salmond and Atkinson – are on stage, with the fourth – William Venables-Vernon – waiting in the wings. The play is ready to proceed.

What of other key figures in the early Society?

John Phillips and William Smith, nephew and uncle, were engaged in a systematic geological survey of east Yorkshire.  They walked in parallel transect lines, a few miles apart; in Phillips’ words:

‘On one of these (lines) Mr. Smith moved with the due deliberation of a commander-in-chief; the other was traversed by his more active subaltern, who found the means often to cross from his own parallel to report progress at head-quarters’.

Both must at some stage have passed close to Kirkdale, but even if they did hear of the discoveries during 1821, it is unlikely that they would have deviated from their mission.

And Henry Baines?  Baines was in Halifax, working as a gardener: and also getting to know the ‘artisan naturalists’, a loose group of self-educated millworkers, blacksmiths, and the like who – collectively – knew a great deal about plants and insects: a formative influence in Henry’s later career.