In early December, the Kirkdale cave became widely known to the public, with an article in the Yorkshire Gazette. This mentioned, in passing, that the collections “were of such an extent as to be too [heavy] for land carriage.  They were sent to London by water” which took five weeks. The Gazette also felt that the entire collection should be kept together, preferably in Yorkshire, and that “if all the specimens of natural curiosity … found in Yorkshire from time to time … had been associated together under one roof in York, they would have formed a Museum of not less value than £60,000”. 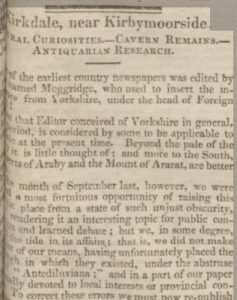