William Buckland’s geological colleagues seem to have been rather 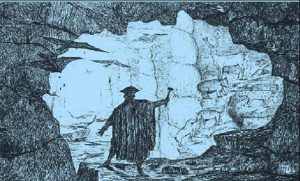 entertained by his enthusiasms, and circulated cartoons and reams of facetious doggerel. Henry De La Beche (later an honorary member of YPS and founder of the British Geological Survey) showed Buckland, in academic gown, entering a cave occupied by various animals, including a hyena, all busy producing more, er, album graecum. An anonymous author contributed this exhortation, under the title Coprology (coprology being, obviously, the scientific study of faeces):

And learn this fundamental truth

The noble science of Geology

Is bottomed firmly on Coprology

For ever be Hyenas blessed

Who left us this convincing test

…. and so on.  (Double entendres in italics, in case you miss them!)

All this was in preparation for a major event in the history of Kirkdale Cave: William Buckland’s presentation of his findings, at a meeting of the Royal Society on 21st February, followed – Buckland’s eloquence and the importance of the Kirkdale fossils being what they were – by a second session a week later.  We can assume that all the principal geologists in the country were there: one person who certainly attended was John Gibson, who had triggered the avalanche.  He must have been well pleased.

A few days later, writing to William Venables Vernon (Harcourt) in York, Buckland recollected ‘the attention you were so good as to pay when in Oxford to my lectures in Geology’ referred to ‘my paper on the Kirkdale cave, which had been read at the RS, and will appear in their next Vol.  It is of unavoidable length …’, and encouraged him to experiment with album graecum – ‘Do get a bit and place in acid for a few hours – the quantity is quite surprising’. Harcourt was an enthusiastic chemist, as well as a geologist, but it is not recorded whether he complied. 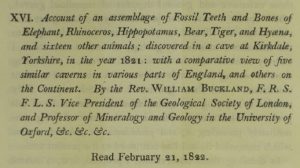 Not long afterwards, Buckland’s Kirkdale paper was indeed published in the Philosophical Transactions of the Royal Society, at the ‘unavoidable length’ of 77 pages, with copious illustrations. This was dwarfed by the publication, the following year, of his monumental Reliquiae Diluvianae; pr, Observations on the Organic Remains contained in Caves, Fissures, and Diluvial Gravel, and of Other Geological Phenomena, attesting the Action of the Universal Deluge. But for the moment, the Philosophical Transactions would suffice: the Kirkdale fossils were firmly in the public domain.