‘Potter Man’, Lee Steele, from Holme on Spalding Moor, has helped the Geological Map Team with one of the problems in putting the final touches to the walk on Geological map in Museum Gardens.

YPS members will remember that we promised to place real samples of Yorkshire rocks next to the mosaic created by Janette Ireland to celebrate the bicentenary of William Smith’s famous map. This is taking rather longer than we had hoped, but we now expect to have the work completed by the end of April.

One of our problems was that two of the rocks, shown by William Smith as ‘Clay with sand and gravel’ and ‘Red Marl’, are really clays. As simply putting lumps of clay next to the mosaic did not seem a good idea, we spent some time trying to work out how to represent these strata.

Lee Steele http://www.thepotterman.co.uk/has come to our aid with his creative approach to ceramics. He listened to our descriptions of what we hoped to achieve, and after long discussions on possible approaches, he fired our clay samples into attractive pieces which will be displayed next to the mosaic, along with our rocks.

The ‘Red Marl’, (modern name Triassic clay), kindly donated to us by Alne brickworks, has been fired into a 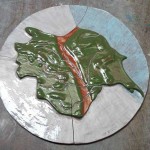 ceramic plaque, depicting Yorkshire. The plaque has been glazed blue for the sea, green for Yorkshire and white for the surrounding counties, but the the ‘Red Marl’ area, a strip down the centre of the plaque, has been given a clear glaze, to show the natural colour of the clay after firing. Lee Steele was very patient with this plaque, as it is not a type of clay particularly well suited for this type of work, and in spite of his best endeavours, it cracked into three pieces. These, however, still give an attractive effect, reflecting the sections into which the mosaic is divided.

The ‘Clay with sand and gravel’, provided an even greater challenge. Our sample is boulder clay brought from Holderness by Geoff Hutchinson. It contained, as William Smith’s description suggests, many stones of different sizes and types. In this form, it could not be fired, as it would have exploded in the kiln. Lee had to disperse the clay in water, and then sieve the stones out. He was then able to create a large shallow bowl from the sieved clay, which has fired to a rich chocolate brown, quite different from the Red Marl. The sieve residue, an interesting range of stones, will be set in resin in the bowl. 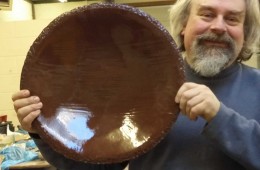