The conservation and installation of two locomotives to Danum Museum during the pandemic: A good news story!

York Consortium for Conservation and Craftsmanship present a lecture on Zoom at 7pm on Tuesday 14th December.

The conservation and installation of two locomotives to Danum Museum during the pandemic: A good news story!

In the Summer of 2020, the National Railway Museum started the practical process of preparing two locomotives to be installed into the newly built museum in Doncaster called Danum Museum. The vehicles would be Green Arrow and 251 and would need to be prepared for museum display in February 2021. The project was described as ‘critically essential’ for the successful opening of Danum Museum and this undoubtedly brought the project team and museums together in extraordinary circumstances.

The first locomotive to be installed was 251, which was built in 1902 in Doncaster and designed and by Henry Ivatt. It weighs 60 tons and has a 4-4-2 wheel arrangement. It is the only enlarged Atlantic in preservation and it was originally built with superheater technology to allow the engine to be more efficient. It was an extremely successful engine and carried freight and passengers’ services throughout the wars.

The second locomotive Green Arrow, V2, was built by Sir Nigel Gresley in 1936 who was apprenticed to Henry Ivatt. The wheel arrangement is 2-6-2 and it weighs 93 tons. It is the last one of its type to survive. 184 were built altogether and they were extremely successful.

Both engines have taken several months of preparation and over 1,000 hours of conservation from collection services, rail operations, engineering, and the volunteers at Locomotion. This work included corrosion treatment, a deep clean and sensitively repainting areas of paint loss by colour matching the livery. This work also included taking an inventory of all parts of the locomotive such as the gauge glasses, lubrication pots and the whistles which have also been recorded onto the National Railway Museum object database.

Participants will be able to raise questions for discussion, and are encouraged to submit questions ahead of time, by emailing info@conservationyork.org.uk. 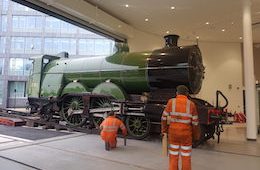