Back to What’s on

This beautiful little fourteenth century building, hidden behind Goodramgate, has a fascinating history. It was built for the Vicars 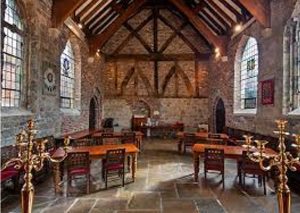 Choral, who sang in the Minster. After the Reformation, it had many different uses, and was in the possession of a firm of Pork Butchers when, in the mid 1970’s, York City Council decided to redevelop the area. All the surrounding buildings, apart from the Hall and neighbouring Chapel, were demolished, and the hall underwent major restoration, which returned it as close as possible to its original state.

The hall now opens for visitors, and has a café serving a range of cakes and savouries. It caters for events, including weddings, and is home to three of York guilds – The Gild of Freemen of the City of York, The York Guild of Building, and the Company of Cordwainers.

Our visit. We will have a short talk about the history of the building, an opportunity to look round, and a cup of tea or coffee with a slice of cake

Finding the hall Bedern Hall is, indeed a ‘hidden gem’. It is situated on Bartle Garth, in central York. Bartle Garth can be accessed from King’s Square via St Andrewgate, or from Goodramgate via an archway on the corner of Deangate and Goodramgate. Full details and map can be found on the Bedern Hall website http://www.bedernhall.co.uk/visit-bedern-hall-in-york/ I would strongly advise checking this out if you haven’t visited the hall before. I can send the information by post to anyone who does not have computer access.

To book Please return the booking form to the Lodge with your cheque, made out to Yorkshire Philosophical Society (in full) or send the form by email to info@ypsyork.org and pay by Paypal at https://www.ypsyork.org/donate-to-yps/

You can download a copy of the form in Word by clicking here:-Bedern Flyer

Although most of the members who visited Bedern Hall were already familiar with it we were given an insight into the history of the Hall and learnt about the Guild of Cordwainers from two guides, Jill and Elizabeth, while enjoying delicious refreshments.

The present Hall was built in 1370 as the refectory for the College of the Vicars Choral, an enclosed complex which was home to the priest vicars who deputised for the canons at the Minster. The complex which was accessed from the passage in Goodramgate consisted of accommodation for up to 36 vicars and had various buildings as well as gardens and orchards.

In the 1650s the property passed into private hands and had various occupants including St. Peter’s School until 1730. By the 1770s it had become a slum area of tenements with a large Irish population. Despite the college buildings being built over, in one case by the Bedern National School in 1870, the Hall remained, but in a state of disrepair. By 1918 Bartons Bakery owned it, using it as coach house, and in 1973 it was sold to Wright Pork Butchers. Due to its thick stone walls it made an excellent cold store. 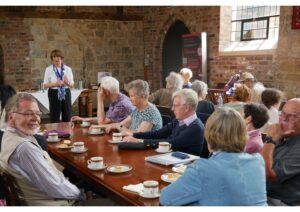 In 1971 the Council bought the Bedern site to implement Lord Esher’s vision for the centre of York and earmarked it for housing. Thanks to the efforts of architect David Green the Hall was saved while the other buildings were knocked down. An archaeological dig revealed evidence of buildings from the original complex such as a kitchen, bakehouse, latrines and two wells. Restoration was begun in 1979 and, as the rules at that time dictated, all modern repairs were to be visible not copies, seen in new brickwork, sills and beams.

The restored Hall then became home to three guilds which did not have their own Halls, the Company of Cordwainers, the York Guild of Building and the Gild of Freemen of the City of York. These guilds founded the Bedern Hall Company and together they fund the cost of running the Hall. The Hall can be hired for events such as weddings, dinners or business meetings which all help with the upkeep and it opens to the public during the week. The Hall has many information boards relating to its history and shows some of the artefacts found in the 1970s dig. For further information the Civic Trust has a good article online and there is an excellent book by Richard Hall.

Elizabeth, as a past Master of the Company of Cordwainers, explained that cordwainers are shoe makers who only use new leather. This meant that cobblers and repairers were excluded as they use old leather. To become a cordwainer you had to be apprenticed to the same master for seven years and to join the guild, among other things, you had to make a pair of leather shoes. Times have changed and you no longer have to make a pair of shoes and can join if you or a relative has some connection to working with or retailing leather goods. Interestingly the guild has goats’ heads on its shield and this references the fact that originally goat’s leather from Europe was used as it was a finer leather. The leather came originally from Cordoba in Spain and was known as cordwan hence the name cordwainer, worker in cordwan.

In 1808 the guilds were in decline and the Company of Cordwainers folded with their treasures and records being put in the Minster for safekeeping. In 1977 a group of shoemakers and retailers re-established the Company and they are continuing to use Bedern as their Hall. Among other things they are involved with the Mystery Plays as in their past and took part in the recent Cart Plays around York performing The Building of the Ark and The Flood. New members would be welcome!

Many thanks to Margaret Leonard for organising this event, the guides, Jill and Elizabeth, and the staff at Bedern Hall.