Etheldred Benett and the Making of Museums

In Spring 2020 YPS hosted with the Yorkshire Museum a placement with the University of York as part of their Public Engagement with History programme for M.A. Students. Here we present some of the research from Emily Markham, the student undertaking this placement.
Dr Sarah King, Science Curator at the Yorkshire Museum, has facilitated this research.

Etheldred Benett (1776-1845) was an early geologist who built up one of the most extensive geological collections of her age. Most of her fossils came from Wiltshire, where she lived.

In 1830, Etheldred wrote to the Yorkshire Philosophical Society promising to give them a selection of fossils and a catalogue of her collection.

Etheldred Benett’s collection included many important finds and she created new names and classifications. Fossil sponges comprised a large part of her collection. Etheldred was the first person to use the term ‘polypothecia’ to describe her sponges and she gave the name ‘drepanites’ to her ammonites (marine molluscs). She found unusual fossil trigoniids (saltwater clams) with their ‘soft anatomy’ preserved. These were the earliest of this kind to be discovered.

She received no formal training, but her voice was heard and she became a well-respected member of the geological community.

Below is a transcript which Emily has made of the letter from Etheldred Bennett to Dr Goldie (YPS). The original letter is in the YPS Archive in the Borthwick Institute.

I am much indebted to you for your very obliging recollection of me in sending me the Annual Report of the Yorkshire Philosophical Society, and I have great pleasure in seeing by it the zealous support which the Society continues to receive. I admire your liberal regulation with regard to Ladies, and if I lived within reach I should assuredly avail myself to it. I have also to thank you for sending to me the York Newspaper containing the account of the opening of the new Buildings of the Society which I read with much pleasure. I regret to say that my health has faill’d me so much during the whole of this year as to preclude the possibility of my attending to any thing beyond the domestic concerns of the day, which is the sole cause why I have not sent the promised fossils to the York Museum. I have a large Basketfull selected for that purpose, but unless they are ticketted and properly packed they will be useless when they arrive; I will hope to send them before I go to the sea in October, which is imperative on me, to enable me to get well through the winter, but I will not promise to do so for fear that I should disappoint you. I know that I cannot send the recent shells with them for they are not selected, but a light Parcel will travel well by Coach at any time.

Seeing in one of the former reports which you sent to me that Orion cuvieri and Cineros vittata had been presented to the Museum together, I guess that they came from Weymouth, and therefore I inclose an account of them which I think will be interesting to Mr Phillips; I was at Weymouth at the time, and I believe that I was the first person who discovered these two species among the numerous Lepas’s with which the Vessel was covered, by inquiring of the Captain I got this information, and I also preserved a quantity of the animals in spirit for the different Public Museums in London and elsewhere they were also collected and sold by a Dealer at Weymouth of the name of Handy.

I know that you will be glad to hear that my Brother John was peaceably re-elected for Wiltshire and that he is tolerably well at present, and when I saw him week ago he was much inclined to accept an invitation which he had received from the Directors of the Liverpool Rail Road to attend their grand Gala on the opening of it. My sister enjoys her normal good health but is gardening mad, a mania which prevails to a great extent in this neighbourhood, she begs to join me in best compliments and I remain 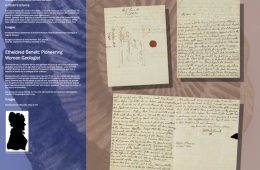