This is an extract from an article “The YPS Lodge and its Architect” by Rita Wood.  The full article can be viewed using the link at the bottom of this page.

The architect of the YPS Lodge was George Fowler Jones who is sometimes said to have been born in Aberdeen in 1818 (though different years are given, and the 1851 census says Inverness-shire was his place of birth).  In his youth he studied photography under ‘Fox Talbot’ for a time, and in later life he exhibited watercolours as an amateur, but as a young man he trained as an architect, being articled to ‘Wilkins’, presumably William Wilkins who had designed the Yorkshire Museum. After the death of Wilkins c.1839 he was transferred to the office of Sir Sydney Smirke ‘and after the fire at York Minster, in company with another pupil, he was sent down [i.e., from London] to take measurements for the restoration of the fabric. This was his first visit to the City he was, afterwards, to settle down in’. For his training, he was based in London, but from about 1844 he lived and worked independently in York. He joined all the relevant societies. He was elected a member of the Yorkshire Philosophical Society in 1845, being listed correctly under ‘Jones’: ‘Fowler’ was not a surname, but was and is often used to differentiate him, and ‘G. Fowler Jones’ was used by the architect himself on a drawing. In 1845 he also joined the Yorkshire Architectural Society (later to become YAYAS). In 1846, the Archaeological Institute of Great Britain and Ireland met in York for a week, its third annual meeting. One of the speakers in the Architectural Section, under the chairmanship of Professor Willis, was Mr G. Fowler Jones; his subject was an ancient cross at Sherburn-in-Elmet. He had made a cast of the half of the cross which was in the church at that time and members could see it in the Hospitium; he told how it had come about that the other half was adorning a wall at Steeton Hall. He dated its ‘rude’ sculpture as ‘early perpendicular’.

In our local ‘Pevsner’ (N. Pevsner & D. Neave, Yorkshire: York and the East Riding, 1995/2002; hereafter P&N), on pp. 90-1, where the local architects working in York are discussed, David Neave says Jones ‘specialized in Gothic, designing a number of competent churches and schools in the city and county’ – though he did more than that, as can be seen from the tabulated selection at the end of this article, and more fully in the biographical article in Wikipedia noted below. While thinking of ‘Pevsner’, we may be sure that G. Fowler Jones gave Sir Nikolaus some pleasure – to be able to write ‘one of the ugliest churches in the Riding’ (Foxholes, 1866) and ‘truly hideous’ (Bilbrough, 1873) must be satisfying after a long day in the field.

Fowler Jones was not famous, not a name known nationally, but he was a busy Victorian architect with a varied output which was not all grand or showy. There is a leaflet or patent published by him and James Jones in 1861 for ‘Improvements in apparatus for protecting and arranging water pipes, and withdrawing water therefrom, and preventing injury thereto by frost’ and, curiously, patents were granted to the pair for inventions regarding propelling and steering steam vessels. James Jones is mentioned in the ‘York Artists’ text, he was an independent carver with premises in Stonegate; he was probably often employed by the architect.

Fowler Jones was elected a FRIBA in 1868, and is perhaps shown robed for that occasion in the photo (York Explore Archives, image 1002400).  By the 1870s he had the assistance of his son, Gascoigne, while another son, Robert, was articled to him in 1882. He had as pupils Edward Taylor and ‘Mr Tomkins’; the first of these became the architect of the York Art Gallery. George Fowler Jones retired in 1893, and died at Malton in 1905. The business was continued by his sons, but probably ceased before the first World War. After his death, over 2000 of his negatives were donated to the Royal Photographic Society; in 2017 their collection was acquired by the V&A and is in storage. He left a few photographs of his restoration of Stonegrave church, and a number of prints of his buildings survive locally. Fifty years of practice in the city must have left a vast number of his minor architectural works around us.

Click below to read a fully illustrated article about George Fowler Jones’ work in York and elsewhere.

The YPS Lodge and its architect

The article contains notes on sources and links to relevant websites.  If any such link does not work, please contact us on info@ypsyork.org. 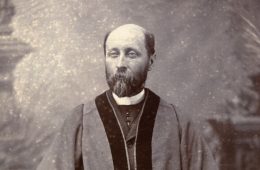