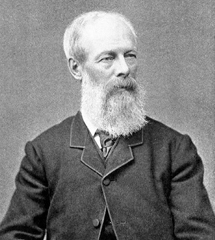 Reproduced from Miall (1896) by permission of the Yorkshire Geological Society

Alexander Henry Green was born in Maidstone in October 1832. He attended Ashby-de- la-Zouch Grammar School where his father the Rev T. S. Green, a noted classics scholar, was the Headmaster. From Ashby he went in 1851 to Gonville and Caius College at Cambridge : Pensioner 1851; Scholar 1852; BA (6th Wrangler) and Junior Fellow 1855; MA and Senior Fellow 1858. At school he had taken an interest in geology and he attended Sedgwicks lectures at Cambridge.

Green and the British Geological Survey

While still at school Green had met Andrew Ramsey (later Sir Andrew Ramsay, Director General of the Geological Survey) who was on a visit to Ashby; Ramsey was impressed by Greens detailed knowledge of the locality and suggested that he should join the Survey  which he duly did in 1862 as an Assistant Geologist under. Sir Roderick Murchison, Ramsays predecessor as Director General of the Geological Survey.

In the Survey Green worked initially in the Midlands on Jurassic and Cretaceous rocks before being promoted to Geologist in 1867 when he was transferred to the Carboniferous of Yorkshire and Derbyshire., thus beginning an association of over 20 years with Yorkshire. Much of his meticulous mapping was on the scale of six inches to the mile (1:10560) on base 6 inch maps that the Ordnance Survey had begun to produce since around 1860. Green wrote three Survey Memoirs Banbury ( 1864), Barnsley (1868) and Wakefield (1869)  and contributed substantially to seven others: Stockport (1866), Part of the Yorkshire Coalfield (1869), Tadcaster (1870), Dewsbury (1871), North Derbyshire (two editions 1869 and 1887), and the massive 823 page Yorkshire Coalfield (1878). This last was the largest Survey Memoir ever produced or likely to be produced subsequently (Bailey 1952); it was edited and mainly written by Green after he had left the Survey.

Green left the Survey in 1874 to become the first Professor of Geology at the new Yorkshire College, now the University of Leeds. In 1875 he remarkably became concurrently Professor of Mathematics at Leeds and for several years he also held a Lectureship in Geology at the School of Military Engineering at Chatham. While at Leeds he visited Newfoundland and the Cape Colony on commissions to investigate the coal-bearing strata of those territories. He remained at Leeds until 1888 when he was appointed Professor of Geology at Oxford in succession to Sir Joseph Prestwich F.R.S.

During his years at Leeds Green published his highly regarded Manual of Physical Geology (1st edition 1876, 3rd edition 1883) primarily for students. Also after having left the Survey he wrote two other books: Essays on Scientific Subjects and Birth and Growth of Worlds besides papers in journals on topics as varied as Sub-aerial denudation, , Geology of the Malvern Hills and Geology of Donegal. During the last phase of his career Green devoted much time to improving the University Museum of Geology at Oxford.

Green was elected a Fellow of the Geological Society in 1862 and was awarded its Murchison Medal in 1892. He became its Vice-President in 1893, a position he held at his death.

He was a Member of the Yorkshire Geological Society from 1875 and served on its Council. He was a Vice-President in 1887.

Green was an early Member of the Mineralogical Society and served on its Council several times from 1879.

In 1890 at Leeds Green was President of Section C (Geology) of the British Association for the Advancement of Science (BA), now the British Science Association.

He was awarded an Honorary M.A. from Oxford University.

I am grateful to Dr Sarah King of the Yorkshire Museum for kindly obtaining for me the sources in the Quarterly Journal of the Geological Society and Nature. Professor Max Rowe of the University of Aberdeen also helped me with searching for information.