Thomas Johnson was born in Selby and baptised at Selby Abbey on 7th September 1600, being, according to now  lost Selby Abbey  records, the sonne of George Johnson, gent. Further Latin flourishes on the same page mark the Johnson family out as one of local importance.

The soubriquet of The Father of British Field Botany arises from Johnsons great work in systematically enlarging John Gerards Herball  of 1597.  Johnsons edition of 1633 ran to nearly 2,000 pages and 2,900 illustrations, listing all manner of plants, where and how they grew and their medicinal properties.  This tome was the first in which such knowledge was systematically arranged, and remained a trusted text for over 200 years. Whilst a scientist, he was still a man of God, stating in the introduction God, through infinite goodness and bounty, has by the medium of plants bestowed almost all food, clothing and medicines upon man.

No accounts have survived of his early life and times, nor of how he came to settle in London, but by 1626, he is recorded as living and practising as an apothecary in Snow Hill, near the Barbican in the capital.

From a description of the plant that he called Throatwort and now known as Canterbury Bells in the Herball it is clear that by 1626 Johnson had begun his travels around the country studying plants. This plant was regarded as a rarity in London, but Johnson writes I found it in great plenty growing wilde upon the bankes of the Ouse as I went from York to visite Selby whereat I was born

In best David Attenborough style, he undertook several botanical expeditions to various parts of England and Wales. The expeditions were very convivial affairs, involving a dozen or so fellows undertaking lengthy walks or river voyages, collecting specimens along the way, relaxing with generous hospitality in local taverns or country houses. An excellent description of his Medway excursion in 1629 is given in The Phytologist   (1848), accessible online.

From 1629 until the beginning of the Civil War in 1640, Johnsons life was exceedingly active, combining his practice as an apothecary with further botanical excursions, drawing and describing the specimens collected, editing previously published herbals and undertaking translations. Being an active member of the Society of Apothecaries brought him a place in Society and the company of Tradescant and Parkinson, along with many other famous gardeners of the era.

His trade as an apothecary led to many enquiries for medical cures. A letter of 1637 from Sir Henry Wotton, then Provost of Eton, and styled The most cultivated man of his time, to Johnson, survives. In it, Wotton describes his symptoms as certayne very noysome odours which the spleen sendeth up cause offence to my sent (scent) and taste, yet without any imaginable taynte of my breath and requests please to add(vise) what hath done any such patient most good. Sadly, Johnsons reply is not known. 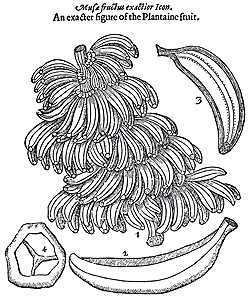 From Johnsons 1633 edition of Gerards Herball

Johnson was also an enterprising merchant. A record of 10th April 1633 shows that he was the first person to sell bananas in England. It is believed that Johnsons bananas came from Bermuda; we would probably refer to them today as plantains. The lyrical quality of his prose is excellently demonstrated in his description of the fruit in the Herball,

each of the fruits was not ripe, being green, each of them the bignesse of a large beane  some 5 inches long and an inch and a half in breadth. The stalk is short and like ones little finger. They hang with their heads down, but if you turn them up, they look like a boat. The husk is easily removed. The pulp is white, soft and tender and ate somewhat like a musk melon.

Johnson continued to research and publish books. Mercurius Botanicus, the first book to list of all the then-known indigenous British plants was published in two parts, in 1634 and 1641.

Johnson also travelled around Wales and wrote the first account of an ascent of Snowdon in 1639. He describes how we sat down in the midst of the clouds, and first of all we arranged in order the plants we had, at our peril, collected among the rocks and precipices.

When the Civil War began, London was staunchly Parliamentarian, but Johnson was a Royalist. His high reputation saved him from suspicion, but by early 1643 he had moved to Oxford, a Royalist town. There he was created Doctor of Physic by King Charles in consideration of his merit and learning.

Johnson enlisted for the King, and held the rank of lieutenant colonel. There are several reports of his dashing bravery and his ability to lead men successfully. By late 1643 he had become part of the Kings forces at the siege of Basing House, near Basingstoke in Hampshire. Several of his actions were mentioned in dispatches For instance, on November 12th 1643, it was reported Johnson, with 30 musketeers drew into a lane under the halfe moon, retreating under the shelter of a hedge. Rebels pursued him but he gave them a very liberall volley which made many of them drop and the rest run. The rebels were severall times caught this way. 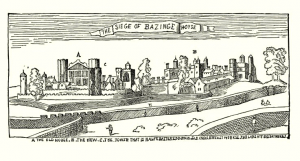 The siege of Basing House [2]

The siege went on intermittently for a year or so, with many more hazardous encounters. On 14th September 1644 came the fatal skirmish. Johnsons men were beaten back by the enemy headed by notorious rebel (and fellow Yorkshireman) Richard Norton. Johnson received a shot in the shoulder from which fever set in and he died a fortnight later. It was recorded that at the time no one was more eminent for his valour and conduct as a soldier as well as being famous throughout the kingdom for his excellency as a herbalist and physician. He was buried at Basingstoke, but his grave is now lost. 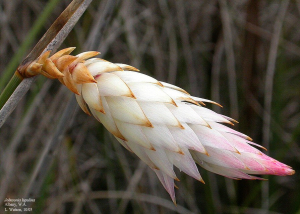 As a result of his renown as a botanist, a genus of lilies (Liliaceae) Johnsonia, bear his name, the most common examples being the Hooded Lily (Johnsonia lupulina) and Pipe Lily (J. pubescens).

In Selby, he has been honoured by having a street named after him. A contemporary obituary notice declared that by his unwearied pains, advanced with good natural parts, he attained to be the best herbalist of his age in England. Canon Solloway, vicar of Selby in the early 20th century, wrote a brief pamphlet on Johnson, in which he bestowed on Johnson a pithier epithet, but one which all residents of the Broad Acres would aspire to : Solloway styled Johnson A worthy Yorkshireman

Bizarrely, Johnson is also celebrated in that epitome of 20th century English culture, Viz magazine, where the strip Tommy Johnson and his big banana is clearly modelled on our man!

To find out more:-

http://goo.gl/16Xgn   – On-line reference to The Phytologist where one of Johnsons expeditions is described. 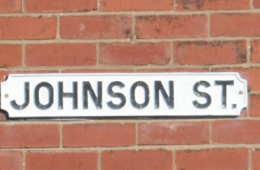