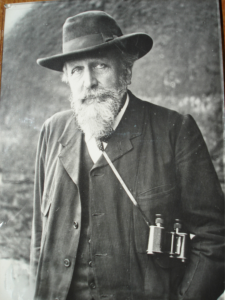 Tempest Anderson was born in Stonegate, York, where his father had a successful medical practice. His unusual first name Tempest was from an eminent West Yorkshire family of that name who were related to his father.  He was educated at St Peters School, York, and University College, London where his academic achievements came thick and fast.  His medical specialism was conditions of the human eye, or ophthalmology, at which he excelled and his natural inventiveness led him to develop several instruments for observing and measuring defects of the eye.  Dr Anderson never married, and spent his spare time on philanthropic activities and contributing to the many societies and charities, local and national, with which he was concerned. In time he was prominent in the British Association for the Advancement of Science, the Royal Geographical, Geological and Linnaean Societies, the Museums Association and many more. But his first love was always the Yorkshire Philosophical Society, of which he was president at the time of his death.  He also had a great fondness for nature and wide open spaces  which took him on many holidays climbing with friends in the Alps. This led to an interest geology in particular, which was to cause him to make many journeys much further afield    and a degree of fame. 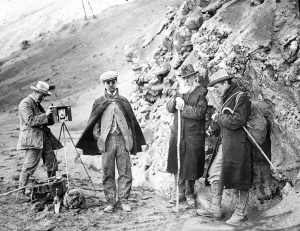 He turned his attention to vulcanology (study of volcanoes), which had received little serious study at the time, and which he felt he could contribute to, even as an amateur. Almost all of his trips from 1883 onwards were for the purpose of observing and recording volcanic rock formations and, if possible, actual volcanic eruptions.  His walking holidays in  the Alps, the South of France or Southern Italy (Vesuvius, Etna, Stromboli), gradually  lengthened into expeditions to Iceland, Central America, Mexico and the West Indies, USA and Canada, South Africa, Hawaii, Samoa and New Zealand, and Indonesia and the Philippines. His most famous journey was to the West Indies in summer 1902 where he witnessed the dramatic and devastating effects of the massive eruption of Mont  Pelée,  on the island of Martinique, where he narrowly escaped with his life,   and also La Soufriére, on  neighbouring  St Vincent which also erupted with massive force earlier the same month.  Dr Andersons ophthalmic  knowledge led him to become very interested in photography  and he always took camera equipment with him on his travels. The early plate cameras were very heavy and cumbersome to use, but he was in the forefront of using smaller lighter hand  cameras with interchangeable lenses and dry gelatine plates.  He made his own equipment and even invented a  panoramic camera with revolving lens, which was later  and independently produced commercially by Kodak.    After his death, his entire collection of several thousand glass photographic plates went to the Yorkshire Museum. This is a fantastic visual record of his geological journeys around the world, the volcanoes he studied and the people he met. You can see where Dr Anderson lived and had his practice  half way down Stonegate at No. 23  –  still with his nameplate, along with that of his partner, Dr Gostling, at the entrance gates. This ancient building is now home to the York Medical Society and if you walk up to the front door youll see a metal tube sticking out above you to the left.  This is the remains of a speaking tube that once led up to his bedroom so that he could be called night or day to attend an urgent case. It is said that Dr Anderson always kept two suitcases ready packed, one for cold climates and the other for hot, just in case he received sudden news of a good volcanic eruption  somewhere in the world and he needed to get away fast! 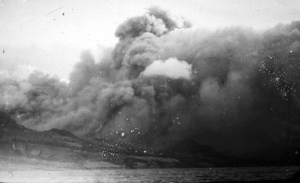 What really made Dr Andersons name in scientific circles were his clear descriptive and photographic records of a pyroclastic flow or nuée ardente as it was known as then.  This was the extremely rapid and terrifyingly destructive flow of superheated gases and steam mixed with volcanic ash, molten lava and  rocks that he had witnessed at first hand in the West Indies in 1902, particularly the hot blast of gases from Mont Pelée that destroyed the port town of  St Pierre, on Martinique, with few survivors.  He worked out the physics behind this phenomenon and found that it was not dissimilar to a particular type of avalanche that he had seen the devastating effects of in the Alps. Dr Anderson was generous with his knowledge, published widely, and gave many lectures   all beautifully illustrated with his own photographs. Dr Andersons last trip abroad was in 1913 when he travelled to Indonesia to record the volcano Krakatoa (on Java) in eruption. He became very sick of heat apoplexy and enteric fever on his voyage home, died on board ship and was buried at Suez. That autumn, clouds of volcanic  dust over Europe gave rise to beautiful Krakatoa Sunsets.     Shortly before his final journey, Dr Tempest Anderson had given money to the Yorkshire Philosophical Society to construct the lecture hall next to the Yorkshire Museum that still bears his name today. Did you know that although the hall is built in the same Grecian Doric Style as the Yorkshire Museum, it is actually built of pre-stressed concrete? There is also a stone plaque to his memory in the north choir aisle of York Minster. See if you can find it. 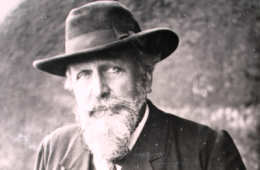