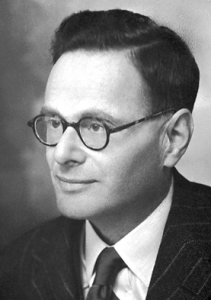 DID YOU KNOW THAT … it was in Sheffield that Hans Krebs did much of the work on the tricarboxylic acid cycle for which he received the Nobel Prize for Medicine in 1953?  The tricarboxylic acid (Krebs or citric acid) cycle is a fundamental metabolic process, common to animals, plants and bacteria, in which a two-carbon (C2) fragment, derived from a food source, is oxidised to two molecules of carbon dioxide with the release of energy.  Krebs showed that this C2 fragment is attached to a C4 receptor, which is then regenerated during the cycle.  His integration of his own observations with those of others into a cyclic process was a major intellectual achievement and laid the foundation for the almost explosive development of biochemistry in the middle of the twentieth century.  Until that time biochemists thought of metabolic processes as linear, each process in isolation.  The concept of a cyclic process led to our understanding of metabolism as a web of reactions, all closely regulated.

Krebs was born in 1900 in Hildesheim in the Rhineland, the son of a doctor.  He followed his father into medicine, qualifying in 1923.  He became interested in research, particularly into the importance of chemistry in understanding biological processes. 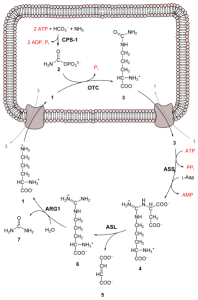 Figure 1
Explanation:
Ornithine (1) combines with CO2 and ammonia to give citrulline (3), which with a second molecule of ammonia (NH3) yields arginine (6), which is then cleaved to urea (7) and ornithine (1). Not all intermediaries are identified in this diagram.

By 1925 he was committed to a research career, and became research assistant to Otto Warburg, the leading biochemist of the time, and worked with him for four years.  The main interest of the research group was cell respiration, and much of the experimental work involved measurements of gas exchange using the Warburg constant volume manometer, an instrument that Krebs refined and introduced to British biochemists.

In 1930 he moved to the University of Freiburg, where he started to study the formation of urea from ammonia and carbon dioxide in liver slices, a system that could form urea from ammonia and carbon dioxide at rates similar to those in vivo.  He found that the amino acids ornithine and citrulline acted as catalysts, or were regenerated.  He went on to formulate the urea cycle, in which ornithine combines with CO2 and ammonia to give citrulline, which with a second molecule of ammonia yields arginine, which is them cleaved to urea and ornithine.  With refinements, such as the formation of carbamoyl phosphate as the first step and in the detail of the conversion of citrulline to arginine, Krebs’s formulation has stood the test of time.  This is shown diagrammatically in Figure 1.

This productive period came to an end in 1933 when, because of his Jewish ancestry, he was dismissed from his post in Freiburg.  He (and we in Britain) were fortunate that he was at once invited to join the Cambridge Biochemistry department, where he quickly became very much at home and continued the work on amino acid metabolism that he had started in Freiburg.  In 1935 he moved to a permanent post as lecturer in the Sheffield Pharmacology department; in 1938 he became lecturer in Biochemistry, still within Pharmacology. 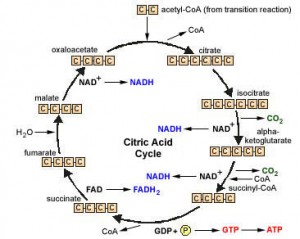 Here he started work on the oxidation of di- and tricarboxylic acids (citrate, succinate, fumarate, malate and oxaloacetate) by preparations of pigeon breast muscle.  These had all been given speculative roles in the oxidation of glucose to carbon dioxide, though there was no understanding of how citrate could be formed from glucose.  Krebs showed that minced muscle could catalyse the formation of citrate from pyruvate (an established product of glucose metabolism) and oxaloacetate.  The individual reactions observed by others could then be arranged in a cycle, in which a C2 unit derived from pyruvate is condensed with oxaloacetate to form citrate, which is then converted step by step to oxaloacetate, with production of two molecules of CO2.  The only missing element was the nature of the C2 unit, which was only settled a decade later.  The cycle has a central role in metabolism, accounting not only for the oxidation of many food materials, but also provides starting materials for the synthesis of many cell constituents.

During the war Krebs collaborated with a number of colleagues in Sheffield on a number of nutritional problems, including studies on the digestibility of high extraction flour and on Vitamin A and C deficiency.

In 1945 he became the first professor of Biochemistry in the University of Sheffield.  The years that followed were years of consolidation in research and development of the new department, both in staff and buildings, buildings which included a terrace house, a converted toilet block and the former Scala cinema: an Honours degree course started in 1952.  Consolidation involved some of the earliest use of radioactive tracers to confirm, for example that the tricarboxylic acid cycle is the major pathway of respiration in yeast.  He was elected a Fellow of the Royal Society in 1947 and in 1952 he shared the Nobel Prize for Physiology and  Medicine with Fritz Lippman.  In 1954 he left Sheffield for Oxford.

By this time the idea of metabolism as a complex interconnected web of reactions was becoming established and the question of how the individual reactions are regulated within the complex became a major interest.  This was the foundation for his research until his formal retirement in 1967 and thereafter in the Department of Clinical Medicine in the Radcliffe Infirmary until his death fourteen years later.

Krebs always attributed his success to luck, that is, to being in the right place at the right time and having gifted teachers and collaborators.  But there is more than luck in having the ability to ask the right question and to develop new methods, where others had failed, to seek the answers.  Those who worked with him stayed with him, regarding him with respect and affection.  His own explanation for this gift, in his autobiography:  ‘I have tried to be fair, honest and helpful,  not to demand more of others than I do of myself and above all, I have tried to run the group “democratically”, always discussing problems with them before making decisions”.  His obituarists said that no one in his circle would dissent from that self-judgement, that he was totally devoid of arrogance ‘advancing his opinions with no expectation that they would receive attention greater than those of the most junior technician’.

To find out more:- 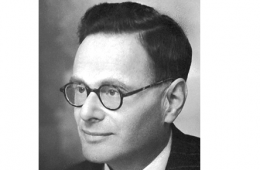