Did you know that the inventor of the aeroplane was a Yorkshire landowner and an early member of the Yorkshire Philosophical Society? Is this a piece of nationalistic fervour that gets the exploits of local heroes out of perspective? For a proper view it is best to consult authorities from outside Britain. In 1909 Wilbur Wright gave the following assessment:

“About 100 years ago an Englishman, Sir George Cayley , carried the science of flying to a point which had never been reached before and which it scarcely reached again during the last century”

while the French pioneer Charles Dolfuss (1923) stated the following:

“The aeroplane is a British invention: it was conceived in all essentials by Sir George Cayley, the great English engineer who worked in the first half of the 19th.Century – – – – – “

How did this all come about?

In 1773 George Cayley was born in Scarborough near the family estate in Brompton and he received a privileged education by tutors that included Fellows of the Royal Society, who undoubtedly inspired scientific interests which included flight. By 1799 Cayley’s first new aeronautical concept was engraved on a silver medal. On one side was a flying configuration which abandoned the flapping wings of previous attempts and obtained lift from air passing over a fixed wing. On the other side of the medal he made the simple but fruitful separation of the force on the wing into a vertical component(lift) and a horizontal component(drag). He also foresaw the need for stability and navigational devices at the back of the flying machine and correctly analysed that the power to weight ratio of available propulsion methods limited what could be achieved in the 19th century. 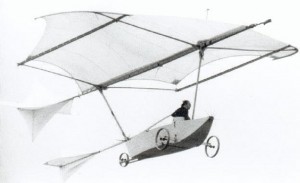 He then converted these concepts into practical realisation, for example in his early 1804 glider (see picture) . His analysis paved the way for systematic scientific measurement of both lift and drag using a whirling arm, a precursor of the wind tunnel: he demonstrated the dependence of lift on wing area, speed, shape and orientation and showed how drag could be minimised by streamlined trout like shapes. By 1810 Cayley had consolidated his work in a series of papers in the Nicholsons Journal of Natural Philosophy, Chemistry and the Arts and gradually moved his interest to other applications of applied science.

In May 2012 a specialist from the BBC’s Antiques Roadshow programme examined George Cayley’s notebooks – read more about this on the Royal Aeronautical Society’s website.

Visit the Yorkshire Air Museum in Elvington and see a replica of Cayley’s glider.

Richard Dee, The Man Who Discovered Flight: George Cayley and the First Airplane, McClelland & Stewart, 2007. A recent biography of Cayley.