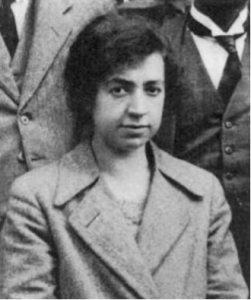 May Sybil Leslie is an English chemist with a fascinating life story. She was born on the 14th of August 1887 in Woodlesford in Yorkshire.(1,3) She came from a relatively humble background but It was Leslie’s innate drive to learn and her determination to pursue a career in science that saw her later working with Marie Curie and Ernest Rutherford, both Nobel prize winners. She was also appointed by the government in WWI as a laboratory head at His Majesty’s Factory in Litherland, Liverpool (1915–18) working on the best conditions to manufacture nitric acid (1,6,7) Later in her career Leslie worked at the University of Leeds as demonstrator, and assistant lecturer, and was then promoted to a full lecturer in the Physical Chemistry department (1924–29) (1,3,5). Her research in chemistry was part of a new development in science around radioactivity and one of her contributions was writing one of the volumes of a A Textbook of Inorganic Chemistry with J. Newton Friend in 1925. This became a classic textbook (1,6)

Leslie certainly defied the norms of her era and showed potential since an early age. She was the first woman from a working-class family in Woodlesford to be awarded a scholarship to a secondary school in Leeds. Leslie was also awarded a West Riding County Major scholarship in 1905 to study at the University of Leeds where she graduated in 1908 with first-class honours in chemistry (2,3)

In recognition of Leslie’s scientific excellence, the University of Leeds supported her to pursue a master’s degree in the labs of Professor Harry M Dawson. Together, they worked on the mechanism of the iodination of acetone. Their research; which showed that the reaction rate was independent of iodine concentration, was later published in 1909 in Transactions of the Chemistry Society.(1,7)

After that Leslie was awarded a scholarship to spend two years working at the Radium Institute in Paris with Marie Curie. Professor Arthur Smithalls from Leeds wrote a reference to support Leslie’s application to work with Madame Curie stating in it her high calibre: “This lady – May Sybil Leslie – is of high personal character and of exceptionally good intellectual abilities. She studied chemistry for three years and distinguished herself greatly. In the last year she has been involved in physio-chemical research with my colleague Dr H.M Dawson and I’m sure you will find her in every way an earnest and excellent worker”.1,3

In Curie’s lab she worked on extracting new elements from minerals containing thorium. She was working on large quantities of minerals in huge jars which was a new experience for her especially as these minerals are radioactive. The hazardous effects of radioactivity were not fully understood at that time, but Leslie pointed out her concerns in a letter to Professor Smithalls in Leeds about the chemistry room in Curie’s lab. She stated that a number of people have been working on radon (a radioactive gas) and that she’s spending a lot of time keeping dangerous people out and airing the room.(1)

Despite these difficulties Leslie successfully completed her research on thorium and generated data on thorium’s half-life, molecular weight and its products of emanation. Her findings were later published in three different scientific articles. (1)

She continued her work on thorium in Professor Earnest Rutherford lab at Manchester Victoria University between 1911-1912. Leslie extended her research work on actinium during her work with Rutherford – another highly radioactive element – and showed that products from different decay series were probably radon. (1,6)

Her most significant research work in chemistry was probably done after leaving academia and entering the chemical industry in 1915. She was hired by the government during WWI to work as a chemist on explosive production especially nitric acid. She was then promoted to be in charge of the government lab in Liverpool, which was a highly unusual position for a woman at that time. After her significant contributions in WWI through effectively optimising the conditions of nitric acid manufacture at large scales, which was vital for making explosives in the munitions industry. She successfully elucidated the pathway involved in nitric acid formation and optimised its manufacturing conditions. Leslie was awarded a doctorate in 1918 from the University of Leeds in recognition of her work during WWI and for her research on radioactivity. By this time, she certainly made history by being the only women chemist to receive recognition for her significant war work, and up to that point she was the only woman at the University of Leeds to be awarded a doctorate. May Sybil Leslie’s work was not recognised, and was forgotten for a long time until her work and research paperwork was discovered by the chemistry professor Geoff Rayner-Canham and Marelene Rayner-Canham when they were carrying out a study about pioneer women in nuclear science. (1) She was also celebrated as one of the unsung heroes of WWI for her work on nitric acid manufacturing in a book by Michael Freemantle: The Chemists’ War: 1914-1928. (2)

She married Alfred Hamilton Burr in 1923, who was a lecturer in chemistry at the Royal Technical College in Salford. After her marriage she continued her teaching and research work at Leeds; publishing a formula to determine the solubility of dinitrotoluene in sulphuric acid water mixture (2, 4), and contributing to one of the volumes of the classic Text Book of Inorganic Chemistry.(1,6)

May Sybil Leslie established herself as a chemist in her own right, she was devoted to scientific research most of her life although her career was sometimes disrupted by lack of opportunities for women at that time. She kept working at the University of Leeds until only a month before her death on the 3rd of July 1937. She was 49 years old when she died and the cause of her death was not reported, although it is speculated her health suffered from exposure to radiation throughout her career. (4)

Her obituary in the Yorkshire Post noted that she was “one of the University’s most distinguished women graduates”. In the Journal of the Chemical Society Herbert Dawson wrote in her memory: “she was exceptionally gifted and spared no effort to remove the difficulties encountered by students in their contact with scientific problems. To her intimate friends she was known as a woman of the highest ideals, of wide human sympathies and of great earnestness of purpose. Her reticence and innate modesty limited the circle of her acquaintances, but such restriction would doubtless count for very little in comparison with the respect and sincere regard of those who were privileged to enjoy her confidence“ (1)

Featured image at top of page: 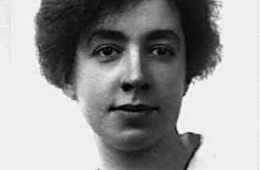