By heredity John Stead had a Yorkshire and metallurgical background. His grandfather, Wharfedale-born George Stead was a proprietor of a Sheffield wheel, a cutlery workshop using water-power. George and his sons, including Johns father William, manufactured blades there from Sheffield steel. But WIlliam left after some time to attend Airedale College in Bradford; after qualifying as a Congregational minister he secured an appointment as minister at the Independent church at Howdon-on-Tyne. His second son John was born there.

Owing to ill-health John received little schooling but was educated almost entirely at home by his father. At 14 he started working in a ship chandlers store at Tyne Dock but soon he began a three-year apprenticeship with John Pattinson (1828-1912), the Newcastle-upon-Tyne public analyst, and received a thorough grounding in analytical chemistry. Afterwards he worked for about a year as an analyst with the Tharsis Sulphur and Copper Company at Hebburn-on-Tyne but in1871 he joined Bolckow and Vaughan, a major Middlesbrough iron and steel company, as a chemist. He actually started at Gorton near Manchester where the company had acquired an iron and steel works with a blast furnace and Bessemer converters pending expansion on Teesside. It was the policy of Bolckow and Vaughan to employ chemists not only for analytical work but also for process investigation: Stead was so employed in connection with substituting low-phosphorus Spanish haematite ore for high-phosphorus Cleveland ironstone as the raw material for making iron  a policy subsequently adopted in one of the blast furnaces at the main Middlesbrough works of Bolckow and Vaughan. Stead was transferred to Middlesbrough on the closure of the Gorton works in 1875 and was involved for several months with the commissioning of a new Bessemer converter at nearby Eston. For three years while at Gorton Stead attended evening classes in chemistry and engineering at Owens College, a precursor of Manchester University. He also somehow acquired a working knowledge of French and German to enable him to read technical journals in those languages.

In 1876, still only 25, he and his former mentor John Pattinson formed the Middlesbrough-based firm of Pattinson and Stead, analytical chemists and consultants. Pattinson retired in 1905 but the firm continued as Pattinson and Stead with a new partner, Henry Frankland (1860-1929). Stead remained associated with the firm for the rest of his life. The firm had extensive business with metallurgical industries, especially but not exclusively in the north of England: Middlesbrough itself was a major centre of the iron and steel industry, based on Cleveland ironstone, and Stead became associated with almost every development in the manufacture of iron and steel. He also became Public Analyst and Official Agricultural Chemist for the County Borough of Middlesbrough. But it was in metallurgy that he became distinguished.

Stead as a Metallurgist

Phosphorus was a cause of brittleness in iron and steel; it was particularly troublesome to Teeside manufacturers owing to their dependen 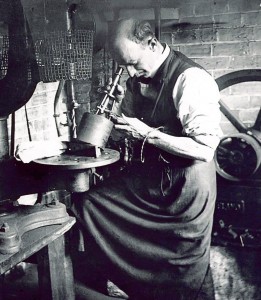 ce dominantly on phosphatic Cleveland ironstones. The problem was much reduced on the adoption of the basic Bessemer process for converting iron to steel (by reduction of its carbon content) which was introduced initially at the Blaenavon ironworks in South Wales in 1879: Stead attended the start-up trials in Blaenavon and was responsible for a key contribution to the success of the process which later became widely used, in Teesside and elsewhere. (This contribution concerned the afterblow, a second stage of oxidation of the phosphorus after the primary oxidation of the carbon; as Stead established, these oxidations do not occur concurrently).

From 1876 onwards Stead wrote some 80 papers on various aspects of metallurgy, many published in the Journal of the Iron and Steel Institute and the Proceedings of the Cleveland Institution of Engineers. In the former journal were his two earliest papers, long ones each in two parts: Phosphorus in Cleveland Iron Ore and Iron (1876/1877) and Dephosphorisation of Iron (1879). The chemistry of phosphorus (and other impurities) in iron and steel was an enduring subject of interest in his papers over several decades. His papers gained him an international reputation.

In 1893 Stead attended the International Engineering Congress in Chicago and there became aware of the work of another Yorkshire Scientist, Henry Clifton Sorby FRS. (1826-1908), a pioneer of petrological microscopy. Sorby had also examined reflected light from polished surfaces of meteorites and metals in a polarizing microscope. Stead became an ardent advocate of studying metals microscopically, both for research and process control. Along with his contemporaries Adolf Martens (1850-1914) in Germany, Floris Osmond (1849-1912) in France and J. Oliver Arnold FRS (1858-1930) in Sheffield Stead became one of the acknowledged founders of metallography  the scientific study of the structure and properties of metals. Stead developed improved methods for preparing surfaces of metals for examination. Heat-tinting and oxidation had been pioneered by Martens but Steads adaptation became standard in the micro-analysis of cast iron. He also designed and had made commercially various instruments and accessories for metallographic work. 1904 saw the publication in book form of Osmonds Microscopic Analysis of Metals, papers of his translated into English by Stead: after Osmonds death in 1912 the book was expanded by Stead for a second (1913) edition incorporating some of Steads own previously published papers on metallography and metallographic equipment. A third, revised and corrected edition appeared in 1924 after Steads death.

In a succession of studies on phosphorus with iron and carbon using chemical and metallographic methods Stead identified and described the microstructures of the binary iron-phosphorus and ternary iron-phosphorus-carbon eutectics in which the phosphorus segregated in iron and steels; this was before the existence of eutectics in metal alloys was generally recognized. He also showed that the phosphorus segregated initially in the ternary eutectic and that the binary eutectic formed subsequently after solidification by outward diffusion of the carbon. [A eutectic is a mixture of substances in fixed proportions that melts and solidifies at a definite temperature lower than the melting points of other mixtures of the components and of the pure components themselves]. 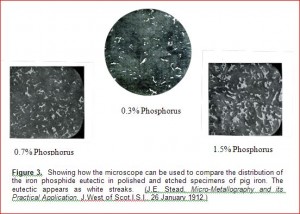 Stead used a combination of metallographic and chemical methods also to investigate many other matters including the nature and structure of bears  large masses of iron that solidified and cooled slowly, sometimes over months, beneath the hearths of blast furnaces when they were shut down for maintenance. These masses could weigh hundreds of tons: one from Skinningrove weighed about 600 tons. Contractions during cooling caused the central plastic mass to be subjected to extreme pressures and to crystallize in vertical columns. He concluded that the ternary eutectic was squeezed out through joints between micro-columns, and that phosphorus was always in the last phase to solidify.

Although Steads main metallurgical interests were with iron and carbon steel he also wrote a number of papers on alloy steels and on non-ferrous metallurgy. He also wrote papers on analytical chemistry and the chemistry of slags from furnace operations

In 1901 Stead was awarded the Bessemer Gold Medal of the Iron and Steel Institute, in recognition of his eminence as a metallurgist and services to metallurgy. He received three honorary doctorates: D.Met. from Sheffield (1913) and D.Sc. from Leeds (1912) and Manchester (1914).

Among various public service activities Stead was a Justice of the Peace for the North Riding of Yorkshire. In education, he was an active campaigner for technical education in Teesside and a founder of the Cleveland Scientific Institution which was established in 1922 with a well-stocked technical library. He was also a Governor of Coatham School in Redcar where he lived for much of his life in Yorkshire and died in 1923.

I am indebted to Charles Morris, Chairman of the Cleveland Industrial Archaeological Society, and John Butler, for permission to reproduce illustrations from Scholes (2014).

Anon 1923, Obituary. Journal and Proceedings of the Institute of Chemistry, 316.

In addition to the above, useful background articles can, (in June 2015), be found on the internet in Wikipedia and other articles, by searching under:

(b) Companies: Tharsis Sulphur and Copper, Bolckow and Vaughan, Pattinson and Stead. 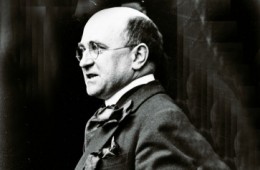