Did you know that … Dr John Snow was a vegetarian and a teetotaller?  But he was much more than that and can lay claim to being both a founder of epidemiology and a pioneer anaesthetist. 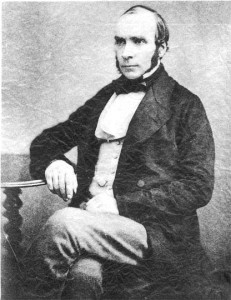 He was born in York, in the parish of All Saints North Street on 13 March 1813.  At the age of 14 he left York for Newcastle and seems never to have returned to the city or the county except for a stint as assistant in a doctor’s practice in Pateley Bridge.  In Newcastle he began his medical training as apprentice to a physician and surgeon.  He remained there, as an assistant in a practice and colliery surgeon until his early twenties, when he moved south, first to Pateley Bridge, but reaching London in 1836, aged 23.  In London he embarked on a formal medical education and was admitted to the Royal College of Surgeons in 1838 and to the Royal College of Physicians in 1850.

By the time he had been two years in London he had established himself in general practice and remained a practising doctor for the rest of his life.  In addition, over the next decade, with nearly fifty articles published in The Lancet, he acquired a reputation as an investigator, always seeking problems that required solutions.

The first use of ether for anaesthesia in London, at which Snow was present, seems to have been a dental extraction, in December 1846.  Ether passed into general use almost at once, but difficulties were soon recognised: some patients were unaffected, some awoke during surgery and some died.  Snow recognised the need for careful control of dose and that dose was greatly influenced by the ambient temperature.  Before the end of January 1847 he had published a Table for Calculating the Strength of Ether Vapour and had also developed, in collaboration with a medical instrument maker, a constant temperature inhaler than could deliver a reliable dose.  Later the same year, as chloroform was adopted as an alternative to ether he examined its properties in equal detail.   As a consequence, he became much sought after as an anaesthetist, both for surgery and in childbirth.  It seems that for childbirth he did not use an inhaler, but administered small quantities (less than 1ml) on to a handkerchief draped over the face, relieving pain but avoiding unconsciousness.  He was called to administer chloroform to Queen Victoria for the birth of her last two children in 1853 and 1857.

Snow is best known for his work on the epidemiology of cholera: everyone “knows” that he stopped an outbreak of cholera by removing the handle of the Broad Street pump.  The full story is, as ever, more complex.

Cholera, as we now understand a water-borne infection, was almost endemic in major British cities for several decades from 1830 onwards.  Snow probably encountered cholera at Killingworth in 1830, but was in London for the 1848-50 outbreak in which 50000 people died.  Snow’s view of the mode of infection was that it was due to a contagious agent passing from patient to patient, rather than the prevailing view that it was due to some undefined miasma arising from insanitary conditions.

There are two important elements to his work on the epidemiology of cholera.  By the mid-nineteenth century, running water was piped to many London houses, with different companies drawing water from sources of different quality.  In 1851 legislation required water supply companies to cease to draw water from the tidal Thames.  Of the two supply companies dominating supply to south London, the Lambeth drew its water from a clean source at Thames Ditton by 1852, but the Southwark & Vauxhall continued to take water from the Thames at Battersea until 1855.  Three districts were supplied with water by both companies.  Snow considered cholera mortality in 28 sub-districts.  In the 12 supplied by one or other company, he found no cholera mortality in sub-districts supplied by Lambeth, but about 1% mortality in those supplied by S&V.  As these sub-districts were socially very different, he turned his attention to those sub-districts supplied by both and found that cholera deaths were confined to households supplied by S&V.

This work was essentially complete in 1854, when there was a local outbreak around Broad Street, close to where Snow had his practice.  As the outbreak developed it did seem to be centred on the water supply from the local pump.

There were outlying cases, particularly a woman living in Hampstead who favoured water from the Broad Street pump for its flavour.  She and some of her household died of cholera, the only cases in Hampstead that year.  There were also some who seemed immune: there were no cases among the workers at a brewery close to the pump, but which was supplied by its own well. 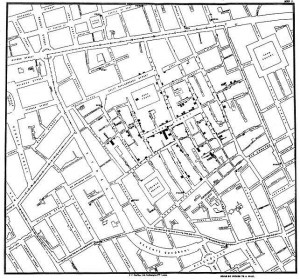 Snow showed later by careful mapping that all the deaths were in the area in which it was a shorter walk to the Broad street pump than any other.

Snow did eventually persuade the parish authorities to remove the pump handle, but probably when the outbreak was in decline.  Subsequent excavation did show that a nearby cesspit was leaking into the well below the pump.

In 2003 a poll of doctors declared John Snow to be the greatest physician of all time.  Whether this is fully deserved is open to debate, but his capacity for acute observation and careful measurement gives him a fair claim to be one of the first medical scientists.

Steven Johnson, The Ghost Map: A Street, an Epidemic and the Hidden Power of Urban Networks, Penguin, 2008 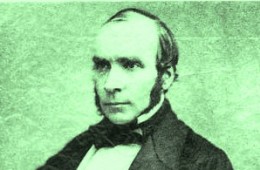