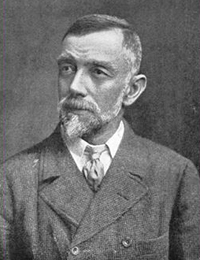 George William Lamplugh was born in Driffield on 8 April 1859, the son of Henry Lamplugh (1835-1865) and Elizabeth née Weightman (1835-?) but little record of his family seems to be available. He was educated in private schools (though I have no details) and did not go on to higher education but instead embarked upon a commercial career with a corn merchant in Bridlington where he lived from the age of thirteen. By 1891 he was the head clerk according to the 1891 census. In his spare time he was an enthusiastic self-taught geologist.

Lamplugh worked initially on the glacial deposits of East Yorkshire and in the Geological Magazine in 1878 (at the age of nineteen) he published his first paper: On the occurrence of marine shells in the boulder-clay at Bridlington and elsewhere on the Yorkshire coast. In this important paper, the start of a lifelong study of Yorkshire glaciology, he recognized the now rarely exposed Bridlington Crag as a shelly mass of erratics caught up in the Basement Clay  a novel interpretation at the time. His records, with meticulous descriptions, of geological exposures now concealed behind sea defences or otherwise vanished, remain a valuable resource. Among other glaciological investigations he supervised the excavation of the pre-glacial buried cliff at Sewerby discovered around 1884 by Clement Reid and now recognized as interglacial: his report in the Proceedings of the Yorkshire Geological and Polytechnic Society and a final report for the British Association of the Advancement of Science appeared in 1887 and 1891, respectively. In 1884 he took part in an early phase of the Yukon gold rush in Alaska, extended by travels in the Canadian and American Rockies, primarily to study large-scale modern glaciation.

In addition to his glaciological interests Lamplugh worked on the (mainly) Lower Cretaceous Speeton Clay and the similar Tealby deposits in Lincolnshire which he correlated on the basis of their belemnite contents. This led to further correlation with their Russian equivalents in a collaboration with Professor A. P. Pavlov of the University of Moscow, and the publication in early 1892 of their book Argiles de Speeton et leurs Équivalents. 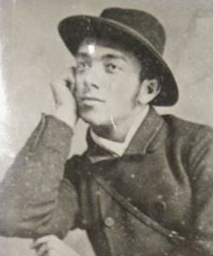 Lamplugh had become an accomplished field geologist with a flair for palaeontology. In 1892 when nearly 32, married with children, and moderately affluent with good prospects, he riskily accepted the invitation of Sir Archibald Geikie, the Director of the Geological Survey, to join the Survey as a Temporary Assistant Geologist at a salary of seven shillings a day  comparable then with a dock labourers pay!

Shortly after his appointment Lamplugh was entrusted with the geological survey of the Isle of Man. The work introduced him to igneous rocks and other aspects of geology with which he had been unfamiliar but he completed the field work (with petrological assistance from W. W. Watts) in 1897 and his map at the scale of one inch to the mile appeared in 1898; his associated sheet Memoir published in 1903, described by Sir Aubrey Strahan as a classic in modern geology, is widely regarded as a model of the genre.

In 1901 Lamplugh was promoted to District Geologist and took charge in Dublin of the Irish branch of the Geological Survey; as DG he supervised and contributed to the mapping of the country around Dublin, Belfast, Cork, and Limerick. He returned to Great Britain in 1905 to head successively the Midlands and North Wales Districts, and he also did some important work surveying part of the Wealden area. In all this work he was the author or co-author of a number of sheet Memoirs. On the appointment of Strahan in 1914 as Director of the Geological Survey Lamplugh succeeded him as Assistant Director for England and Wales, a post that he retained until his retirement in 1920. During this last phase of his career he notably interpreted previously unintelligible records of boreholes made to establish the extent of the Kent coalfield; his findings clarified the Mesozoic geology of southern England.

In spite of his busy working life Lamplugh managed to visit a number of distant lands with geological or glaciological objectives, all before the First World War when travel was not easy. His adventurous journey to the Yukon in 1884 has already been mentioned. He travelled twice more to North America, in 1893 to visit the Grand Canyon, and in 1897 for a meeting of the BA in Vancouver. Two of his other travels were linked to overseas meetings of the BA: in South Africa in 1905 and Australia in 1914.

Before the meeting of the Association in Johannesburg in 1905 Lamplugh, at the request of the Council, studied the geology and physiography of the Zambezi Gorge below the Victoria Falls. Livingstone, the first European to discover the falls (in 1855) had attributed their origin to a cataclysmic volcanic rift and this was the generally accepted view until it was challenged by A. J. C. Molyneux in the Geographical Journal in January 1905. After a systematic examination lasting seven weeks, in July and August, Lamplugh supported Molyneuxs suggestion that the gorge (like that of Niagara) had been formed by normal erosion exploiting faults and joints. Lamplugh published a paper on the subject in the Geographical Journal and a longer one the Quarterly Journal of the Geological Society, both in 1908.

In his penultimate venture abroad Lamplugh attended the 1910 meeting of the International Glaciological Congress in Stockholm and went on an associated field excursion to Spitsbergen under the leadership of Baron Gerard de Geer, the Swedish pioneer of varve chronology. In Spitsbergen he saw shelly drift in the process of manufacture, a satisfying link with his early investigation of the Bridlington Crag.

Lamplugh was a member of the Yorkshire Geological Society (YGS) by1878 as a paper of his On the divisions of the glacial beds of Filey Bay appeared in the Societys Proceedings that year; he was President 1921-1922. The Geological Society (of London) of which he became a Fellow (FGS) in 1890 and President 1918-1920 awarded him its Bigby Medal in 1901 and its premier Wollaston Medal in 1925. In 1906 he was President of Section C (Geology) of the British Association (BA). He was also a Fellow of the Royal Geographical Society (FRGS) from 1905 and Council member 1912-1915. It was in 1905 too that, most importantly, Lamplugh was elected a Fellow of the Royal Society (FRS); he served on its Council as well (1914-1916). Having formerly been an amateur geologist he continued in his later life to be supportive of various provincial societies besides the YGS including three of which he was President at some time: the Yorkshire Naturalists Union, the Hull Geological Society and the Hertfordshire Natural History Society.

In general Lamplugh was not much interested in honours and although not specific, Strahan reports that he declined some. This may be why he did not collect any honorary university degrees. But his name is commemorated in the small (16 x 3 km) ice-capped Lamplugh Island at 75º 38 S, 162º 45 E which was charted by Shackleton during his 1907-1909 British Antarctic Expedition; Shackleton named the island for Lamplugh who gave assistance to the expedition. (The island which lies 7 km off Whitmer Peninsula in Victoria Land had originally been sighted by Scott on his 1901-1904 British National Antarctic Expedition).

Catt, John A. (2006). The work of G. W. Lamplugh in understanding the Quaternary history of East Yorkshire. Humberside Geologist No. 14, 83-89. (The paper includes references to 11 publications of Lamplugh relating to the glacial geology of East Yorkshire, 1879-1919).

S(trahan), A. (1926). Histories: George William Lamplugh, FRS, (Geologist Extraordinaire). The Geographical Journal, 66 (6), 529-531. (The obituary, signed AS, was almost certainly written by Strahan. Although not identical to the obituary above, it has a number of close similarities in structure, content, and in places phraseology). 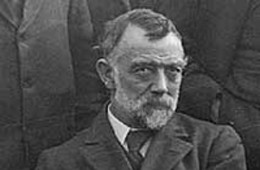